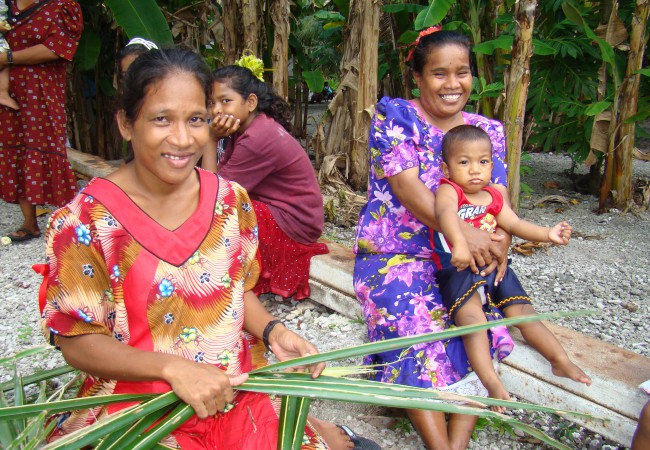 Asian Development Bank President Takehiko Nakao delivered an important development policy speech at the University of the South Pacific late last month during his first visit to Fiji. The presentation highlighted a donor development disconnect in the region: the marginalization, through aid policies, of rural islanders who are ‘resilient’ and the focus on building ‘resilience’ in urban populations that are not. Given the poor performance of island governments in delivering on the eight Millennium Development Goals from 2000 to 2015 and the assumption in September 2015 by these same governments of 17 Sustainable Development Goals to implement for the next 15 years, the direction of aid in the Pacific islands clearly needs a re-think.

In his presentation, President Nakao check marked the main objectives for ADB in the region: Private sector to take the lead in creating opportunities for growth; substantial infrastructure investments in communications, seaports and airports to reduce the high cost of doing business; institutional and policy constraints such as barriers to imports and slow and complex customs procedures to be addressed; expand opportunities for education which can promote innovation and develop the skills required for Pacific countries to engage globally; and Pacific islands to keep their unique cultures, social fabric and environmental beauty as they aim at greater integration.

Worth considering is President Nakao’s observation that while life expectancy has risen and average income has increased in the region in recent years, the flip side has seen a greater number of islanders facing hardships, increasing vulnerability of the islands to natural disasters, and the need for ‘renewed’ efforts to implement the eight Millennium Development Goals (to be replaced, next month, by 17 Sustainable Development Goals). A Pacific Islands Forum Secretariat report showed that 10 of 14 Pacific members failed to implement a majority of the eight MDGs, while three could not manage to implement a single one. This is a big red flag and suggests a leadership gap — or an absence of ‘champions’—that has prevented the region from delivering on health, education and poverty reduction goals despite massive foreign aid.

Official development assistance to the 14 independent Pacific nations doubled since 2002. ADB has kept abreast or even ahead of this trend. President Nakao confirmed that ADB’s assistance to the Pacific more than doubled in the last decade, with over US$2 billion in loans, grants and technical assistance approved from 2005 to 2014 compared to US$856 million from 1995 to 2004. Meanwhile, President Nakao emphasized that ADB is integrating ‘resilience’ to climate change and natural disasters ‘into everything we do in the Pacific.’

The lack of social, health and economic progress in many island nations, the increasing urban overcrowding that exacerbates vulnerability to poverty and disasters, and rising unemployment forces the obvious question: What benefit is the public receiving from this multi-billion dollar aid flowing into governments in our region?

In addition to asking what benefit the public is getting from this government aid largesse, another worth asking is, ‘Who is resilient in the Pacific?’ It is certainly not people in the urban centers, which are on the receiving end of most of this foreign aid. If container ships that bring imported goods stopped coming, villagers and outer islanders would survive because they are resilient, having self-reliance skills for survival on these islands. One hundred years ago, when a cyclone swept through, there was no International Red Cross or U.S. Agency for International Development to swoop in with food, water and other aid. Life was harder, but traditional systems were honed over centuries so that islanders could live on remote islands. These traditional systems, many of which are still in practice in rural areas, conserve coastal fisheries, manage agriculture crops, and govern teaching of navigation, canoe building and local medicine. We have a lot to learn about resilience from outer islanders, and should be incorporating traditional systems into resource management because they have worked for centuries.

A key challenge for many islands is that most aid projects are initiated by donors in conjunction with urban center-based government officials with little participation from outer islanders and local community leaders in addressing sustainability needs of their islands. A vestige of cargo cultism, often people think if it’s from the outside it must be better. When it comes to ‘resilience,’ however, this is not the case.

The World Happiness Report 2015 makes an important point about ‘resilience’ without actually using the word: ‘Countries with sufficiently high quality social capital appear to be able to sustain or even improve subjective well-being in the face of natural disasters or economic shocks, as the shocks provide them an opportunity to discover, use and build upon their communal links.’ Translated, this means people whose culture and bonds are strong, who work together as a way of life are better able to withstand problems that befall their islands. Like sharing fish from the day’s catch with your neighbors, you come together to fix a problem. Phrases in the Marshall Islands such as ‘kan dikdik kan yokwe’ (we share what little we have with love), ‘jiban dron’ (helping each other) and ‘jake jobol eo’ (share the wealth) do, in fact, govern life in the rural areas of the Pacific where culture remains the underpinning of life — in great contrast to the centers today.

Yet donors and recipient governments want to concentrate funding into cities or sub-centers because it is ‘very costly’ and more difficult to invest in services on outer islands or rural villages, a point emphasized by President Nakao. Still, if these remote areas are the backbone of our islands’ cultures and sustainable living, perhaps the most important question to ask is, are they worth saving? Because if we want to keep people on the outer islands, we need to get engaged in a ‘conversation’ about development needs and priorities on the outer islands instead of just giving things to them — solar lights, water catchment tanks, small fishing boats — as now typifies rural development projects. If maintaining this self-reliance strength is not a priority, then following current policy toward development will have the desired impact: In another 15 years, the remote islands will be empty, everyone gone to capital cities, where stresses on already over-taxed government services will multiply, or migrated out to the United States, Australia, New Zealand or elsewhere.

The donor aid cycle perpetuates itself: as more people leave rural locations, resilience declines, requiring more aid to boost resilience and help people find a way out of poverty that doesn’t exist to the same degree on remote islands. Maybe the important point to keep in mind is that current policies keep the aid industry chugging away. They are not expanding existing resilience and self-reliance but attempting to create it in an urban environment where dependency, corruption, and poverty combine to undermine most donor efforts at creating resilience that is already in place just a few miles away on another island. Island government departments that cheerfully jump on the aid bandwagon instead of pushing for island-centered development strategies that promote rural development to increase self-reliance are as much a part of the problem as the people arriving on airplanes with draft plans waiting on signatures to implement.