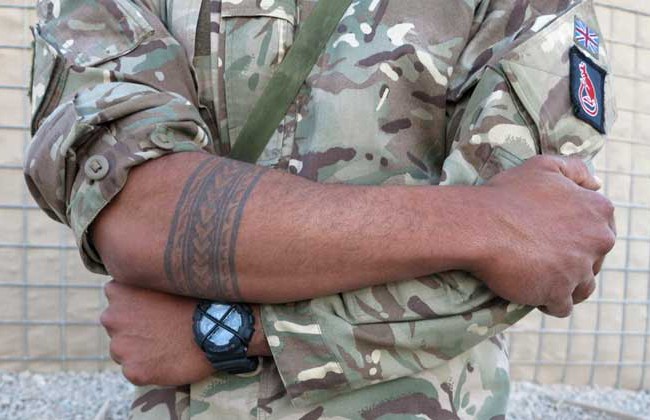 I knew there would be a lot of Micronesians serving in Afghanistan, but what I didn’t expect was the high number of Fijians and Tongans. There are at least 300 Tongans and 100-200 Fijians in-country at any one time, making them the next most numerous after the Micronesians, in terms of Pacific island nationalities serving there. Since Fiji as a nation is not deployed as part of ISAF, instead you have Fijians serving with the British and Australian army, and also as civilian contractors. From infantry soldiers to truck drivers to dining facility staff, Fijians can be found in a variety of jobs here.

While only a handful of Fijians serve in the Australian and New Zealand defence forces, there are currently more than 2000 Fijians enlisted with the British army worldwide, a very substantial number. Fijian troops have a well-earned reputation as professional soldiers, particularly as UN peacekeepers in the Middle East. Although many would be aware of the famous Gurkhas from Nepal serving with the British army, less well known are the large numbers of ‘Pacific Gurkhas’ serving with the Brits and the active recruitment that still goes on in Fiji. Many cite the benefits of career and pay that comes with a stint in the British army, but there is a price to pay – so far 9 Fijians have been killed in Afghanistan with many more wounded. They are included among the 446 British soldiers killed there so far, and their names and place of origin are on this online list of casualties.

‘Bula! (hello!)’ It took a moment for me to understand the mix of thick Scottish brogue and Fijian language coming from Staff Sgt Ilimo Dovibua. I guess that’s what happens when a Fijian spends 13 years with the ‘the Highlanders’, 4th Battalion, Royal Regiment of Scotland. They are the ‘desert rats’ who found fame in north Africa during World War Two, but are now deployed in various other desert conflicts.

Sgt Dovibua joined the British Army in 2000, with no previous background in the Fijian army. ‘After the Fiji coup in 2000, I was looking for work and worried about the local situation. There were British army recruiters in Suva so I decided to join up.’

‘We do 6 month tours here and then go back to our base in Germany. This is my third tour and I was also in Iraq. It is basically the same conditions and same hostilities, but in Iraq we were mostly in armoured vehicles whereas here we do a lot of foot patrols.’

Sgt Dovibua has risen in the ranks and is now a Company Quartermaster, handling a lot of the supplies to keep British troops on the go. Like many of his Fijian comrades, he loves his rugby and says proudly ‘Half the British army rugby team are Fijian and almost all the rugby 7s team is Fijian. It’s a good way for us to integrate and be appreciated’.

He notes that there are also some Fijian officers in the British army who have gone through Sandhurst for their training; there are at least 5 Majors, a bunch of lieutenants and some in the SAS, Royal Navy and Royal Air Force too.

‘We even have a couple of Fijian chaplains in the army, so we are bringing God back to British!’ he laughs.

Many of them cited the same reason for joining up: the coups of 2000 and 2006 prompted them to think there was no point staying at home where the politics – and job opportunities – were too unstable.

Many of them cited the same reason for joining up: the coups of 2000 and 2006 prompted them to think there was no point staying at home where the politics – and job opportunities – were too unstable. The chance to earn good money and work overseas was a significant draw. Yet unlike so many who join the US army (mainly from Mexico and South America) so they can get a ‘green card’ after 5 years’ service, the Fijians say they want to return home at some point. None claimed that getting a British passport or residency was a reason for them joining.

For some, like Sgt Lisa Rokoyadre from the Lau islands who handles ammunition supplies, joining the British army ‘was all about adventure – and escaping from my parents who wanted me to do something else’.

There are Fijian contractors everywhere in Afghanistan, and I found a couple in Helmand who had even created their own little Fiji club in the compound of National Air Cargo, Camp Bastion, where some of them work. I had brought a packet of prized Vanuatu kava with me all the way to Afghanistan with the hope of sitting around the kava bowl one evening with Fijian troops and having a few shells in this most unlikely setting. But our British Army minders forbade our kava session so I ended up leaving my kava packet with Luke Tokaduadua and his fellow Fijian contractors to add to their regular kava sessions. Somehow they are able to source kava and manage to have a couple of sessions per month here in the Afghan desert.

They take me one evening into their club, where Fijian graffiti, flags and memorials line the wall in a room next to the National Air Cargo office. There are some moving tributes to fallen Fijians here and this club is where Fijians from all over Afghanistan come on their National Day to celebrate – a little corner of Afghanistan that is forever Fijian, you could say.

I had also hoped to visit the Tongan troops based here at Camp Bastion, especially since they have a significant number of troops here (around 300) by Pacific standards and are the only Pacific nation to have deployed under their own flag, as a sovereign nation. But I was informed by my British minder – who said he had been given no explanation – that I would not be able to meet or interview any of the Tongans deployed. This was one of the few disappointments of my trip – the only Pacific soldiers not open to share their experience and be documented. Whether this was for any tactical reason or a hangover of Tonga’s rather autocratic, royalist history is unsure. It certainly doesn’t reflect Tonga’s attempts to move towards an era of democracy and transparency and it’s unfortunate not to have them represented in this Pacific soldier project, and without an explanation.

So after spending a few days with the Brits and Fijians, it was time to return to Kandahar and our next mission – a convoy patrol down to the Pakistan border to watch Guam Battalion soldiers being trained how to fly drones.