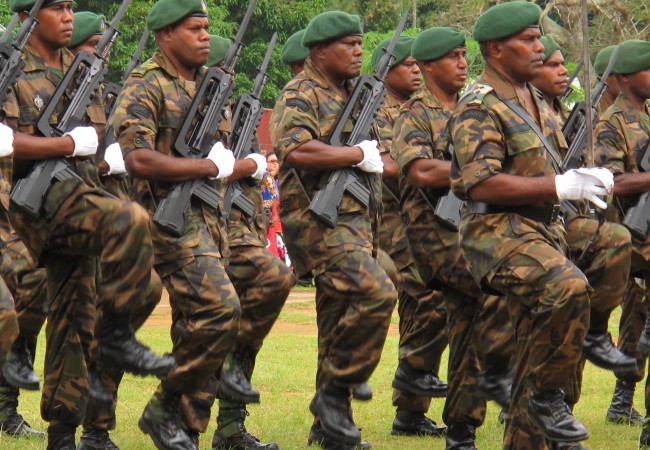 IN VANUATU an Indonesian C-130 military plane arrives to dispense computers, tractors and offers of military training. In Tonga, government officials crunch numbers to service outstanding debts to China – nearly 30 per cent of GDP.1 From Micronesia come calls to relax visa requirements for Chinese and Russians entering these once US dominated territories. In Darwin, the first rotation of US marines sets up camp in northern Australia for prepositioning in the event of contingencies in Melanesia and the South China Sea. Russia’s foreign minister goes to Fiji, signaling a Russian ‘pivot’ into the Pacific, shadowing the US move. Everyone is ‘pivoting’ into the Pacific it seems. Israelis and Palestinians, the Arab League and Luxemburg,Cuba and the UAE.Even North Korea. All have come to court.

Around the Pacific new alliances, new fault-lines and new opportunities are opening up after decades of sleepy neglect. The Pacific is strategic again for the first time since World War Two, but the old ways no longer apply. The contest is no longer between one or two strong adversaries, but between at least nine significant powers: Australia, the US, China, Russia, Indonesia, India,Taiwan, Japan and the EU.The Pacific 9 are using diplomacy, money and the power of ideas beyond military strength, to win hearts and minds, access natural resources and gain a handy UN vote. For Pacific island nations caught in the middle of this new Great Game, many are no longer pliant islanders accepting whatever fate deals them, but active, engaged players deciding their own alliances and future.