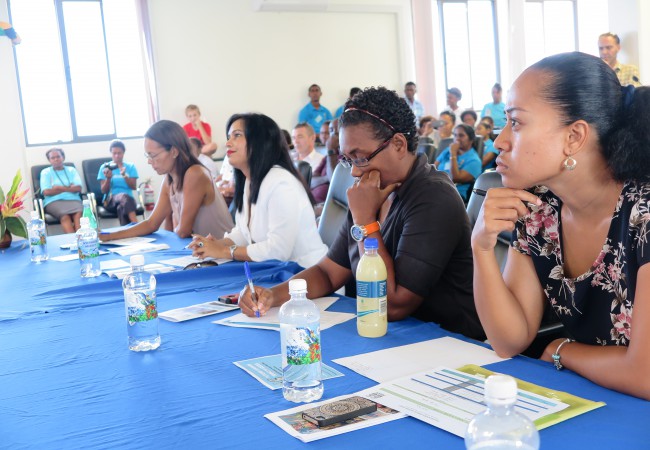 In November 2015, the Pacific Institute of Public Policy, in association with the Vanuatu Ministry of Education and Training, hosted the second annual Melanesian School Debate, following the success of the inaugural competition hosted by the Institute of Business Studies in Port Moresby last year.

Students from Solomon Islands, Papua New Guinea and Vanuatu were selected through national competitions. Fiji, a newcomer to the competition, was represented by students from Sangam Secondary College, Nadi. Unfortunately, at the last minute, the PNG team were unable to travel, but the gap was filled by a number of ‘All Star’ teams competing against the national representatives.

In a captivating series of debates, teams tackled a host of front-page issues including: governing systems, climate change, poverty, international diplomacy, and peacekeeping.

Listen to the audio broadcast

Overall, it was Tanya Wickham of Solomon Islands who was presented with the competition Best Speaker award, with her ability to eloquently rebut any point put forward by her opposition. William Natiko of Vanuatu was awarded the Most Improved, showing significant progression over the course of the competition. Patrick Lal from Fiji came away with the People’s Choice award, thanks to his charming and dramatic style of presentation that never failed to entertain. All three prizes were kindly sponsored by Vanuatu Copra and Cocoa Exports who supported our young leaders with a new tablet to assist them in their future research and learning. The debates were streamed live (via You Tube) thanks to the Vanuatu Government’s Office of the Chief Information Officer. The venue was provided by the Vanuatu National Provident Fund.

The debates were not the only benefits of the competition. A series of activites were designed to promote fraternity and cultural exchange. Teams enjoyed Vanuatu’s international, big screen hit Tanna at Tana Cine, as well as visits to the Secret Garden, Mele Cascades, and the Mele Beach Bar where they witnessed the world famous Vanua Fire show. Asco Motors generously provided their community bus to transport teams to all the events.

Plans are unfolding to expand the event in future years, with the hope of including teams from the Melanesian territories of New Caledonia and West Papua. Sub-regional competitions for Polynesia and Micronesia are also being considered with the view to holding an annual Pacific final.