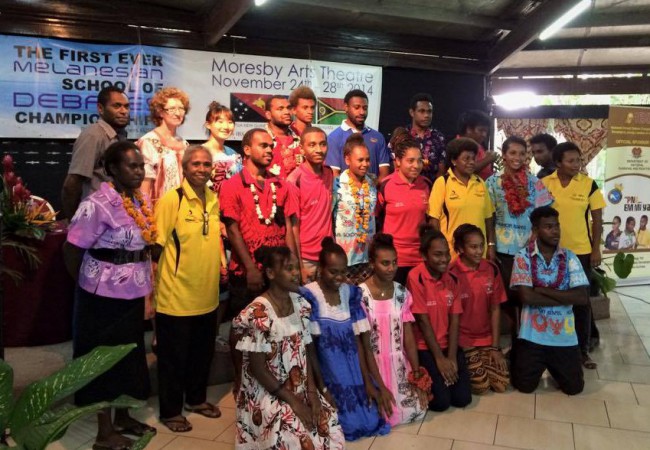 The sub-regional secondary school debating competition emerged from the success of national events, and the collaboration of the respective organising agencies: the Papua New Guinea based Institute of Business Studies, the Solomon Islands Regional Youth Parliament Conference, and the Vanuatu based Pacific Institute of Public Policy.

The inaugural event was hosted at the Moresby Arts Theatre by the Institute of Business Studies, with support from the Department of National Planning and Monitoring.

The week long programme gave rise to a series of inspiring debates, covering a range of important regional policy issues.

Round 1: Vanuatu vs Solomon Islands
All customary land in Melanesia should be registered to ensure sustainable development and economic growth

Round 2: Vanuatu vs PNG
Donors should decide how Pacific Island countries spend their money

Round 3: PNG vs Solomon Islands
It is fair for Australia to negotiate with Pacific island countries to host asylum seekers

Final: PNG vs Solomon Islands
Natural resource extraction in the Pacific Island countries has led to immense wealth for its people

In the end it was the home team of PNG that took the inaugural champions shield.

Participants also engaged in a range of cultural and learning activities, including scheduled visits to Port Moresby landmarks including; the National Parliament, the National Museum, Botanic Gardens, and a visit to the recording of the Tainim Graun talkback show.

The Pacific Institute of Public Policy was nominated to host the 2015 competition in Port Vila, and will work in partnership with Vanuatu’s Ministry of Education and Training to expand on the success of this year’s event.