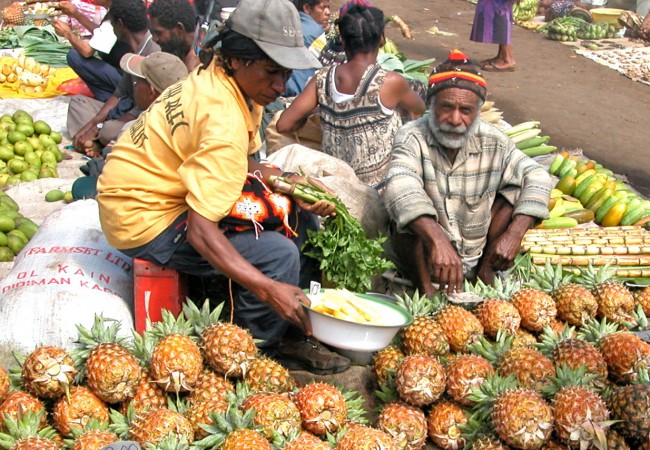 On October 19, 2015 the Constitutional Law Reform Commission launched the draft report on the Review of the Informal Sector Development & Control Act 2004 at the University of Papua New Guinea. The report contains a set of recommendations and the proposed bill that would be presented to the government for its consideration and endorsement sometime around November. If passed the bill may well be the game changer to transform PNG’s socio-economic landscape. Particularly if the informal economy is seen as a wealth distributive mechanism, it could allow money generated in big impact projects such as the PNG LNG, to be transferred to the majority of the population who are its beneficiaries.

Furthermore, if provided with the right environment, it could unleash entrepreneurialism and innovation that is abundant among many Papua New Guineans but lethargic due to lack of support. One should only take a bus ride to the infamous Gordon Market or travel up into the Kakaruk (chicken) Market in Goroka or elsewhere to witness the vibe of energy and salesmanship at play. This is what the law aims to nurture but in compliance with appropriate minimum standards to protect consumer welfare and generally minimize its negativity.

Yet the challenge will once again fall on the shoulders of the government to ensure that the intention of the law is realized. Already the government is urged in the report to step up and provide leadership in administering the law as well as providing essential public goods and services to encourage the development of the informal economy in PNG. So far the government has failed miserably in this area although it has introduced a policy and a law to address issues affecting the informal economy. This reinforces the sad reality that implementation and enforcement have always been a challenge for the PNG Government. Most Local Level Governments are struggling to function effectively in most areas of the country due to lack of support both in terms of resources and limited understanding of their functions and responsibilities. The report alluded to the fact that most LLGs that were consulted had no idea about the existence of the law although it is a national law.

By allowing provinces to have the freedom to make necessary amendments to the modal law to suit their unique situation, it is hoped that they will effectively control negative aspects and promote the positive side of their informal economy.

At the national agency level the report found that no oversight was provided making way for administering authorities to make laws without alignment to the Informal Sector Development & Control Act 2004. In most cases administering authorities simply turned a blind eye on the law. For instance, in 2012 the courts making reference to the Informal Sector Development & Control Act 2004 restrained the Lae City Council from implementing its decision to close down informal markets in the city. In the case of National Capital District Commission (NCDC), buai producers and political leaders in Central Province issued threats challenging the legality of the buai ban law although this has not come to pass. If the ban was contested in the courts with reference made to the Informal Sector Development & Control Act 2004, the outcome could have changed the dynamics of the informal economy in PNG.

This is where the Constitutional Law Reform Commission’s (CLRC) foresight in introducing a ‘modal law’ is important as it bypasses the difficulties that could have eventuated if a national law superimposes itself with no regard to the administrative set up of certain provinces like NCDC. By allowing provinces to have the freedom to make necessary amendments to the modal law to suit their unique situation, it is hoped that they will effectively control negative aspects and promote the positive side of their informal economy. By having the Department of Community Development & Religion as the lead agency providing oversight on the law, it is envisaged that the amendments will be made with due respect to the spirit/intention of the national law as well as in alignment with the national informal economy policy.

The department to its credit has already embarked on a restructure (with no progress as yet) that will see a new section dedicated to coordinating the implementation of the policy and the law. Yet questions are being asked if this arrangement will yield any tangible results. The department itself is still reeling from the leadership tussle which transpired two years ago which has seen the department fragmented into factions as staff took sides. The aftermath of this battle can still be seen today with most of its offices half empty and manned by only few dedicated officers. In this environment there is no guarantee that the law will hit the ground running once it is passed by the government. This is where the department with the aid of CLRC should explore options that will lead to the effective implementation and administration of the policy and the law. One option would be for the department to quickly work towards establishing a stand alone mechanism, like an office within its structure. Such a set up, apart from speeding things up, would allow the department to effectively reach out (going beyond its traditional role as a social welfare department) to other stakeholders whose mandate or policies are related to aspects of the informal economy policy and Act.

On the other hand the informal economy participants for their part, misunderstood the law the first time it was passed by parliament, subsequently giving rise to the proliferation of diverse sets of informal economic activities, some of which posed serious health and safety risks. This meant that balance needed to be found in the law to ensure that the growth of the informal economy is controlled to minimize its harmful effects. The informal sector law in its current form in fact advocates for this. This is contrary to the views that it ‘gave fire’ to the widespread chaos that is unfortunately the hallmark of PNG’s informal economy. The draft report to the credit of the CLRC, has reinforced this idea with penalties raised depending on the severity of the offence, which is determined by taking into consideration an informal economic business activity’s impact on the environment, hygiene, health, safety and the nature of the items sold such as whether it is addictive and other factors. Furthermore, it has inserted a provision to deal with betelnut-related issues which now imposes a much tougher penalty for irresponsible chewers.

Busa Jeremiah Wenogo is from Papua New Guinea and is an economist and national award winning freelance writer. He works with the PNG’s Consultative Implementation & Monitoring Council (CIMC) specializing in the area of PNG’s informal economy. He is the creator and administrator of the Facebook page Black Economy - The truth about the other side of PNG and the blogsite PNG Informal Economist.