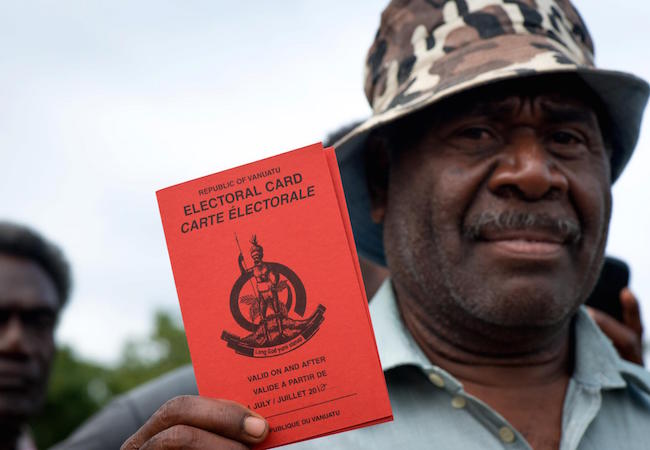 Last week, when Vanuatu’s president, Baldwin Lonsdale, was out of the country, the speaker of Parliament pardoned himself and 13 lawmakers for allegedly accepting bribes to vote down the previous government. On Friday, 11 of the 14 pardoned parliamentarians were arrested. In an email interview with World Politics Review, Derek Brien discusses the causes of political instability and corruption in Vanuatu.

WPR: What explains Vanuatu’s historical political instability, and what impact has it had on the country’s governance and democracy?

Derek Brien: The electoral system rewards personality politics and facilitates minority representation. It also complicates party dynamics, as candidates are pitched against members of their own political grouping in open, multi-seat constituencies. Turnover is high at each election, and voters tend to judge candidates on their ability to deliver resources to their communities rather than on policy positions or political ideology. Bloc voting directed by community leaders is commonplace. Although ostensibly a secret ballot, analysis of election results by polling station enables politicians to determine which communities voted for them. Those that did not are penalised when it comes to the distribution of resources. These elements feed a vicious cycle of compounding political fragmentation and instability.

In the 2012 general election, 346 candidates from 32 political groupings contested the 52 parliamentary seats. The average number of votes to secure a seat was 832. In one constituency, the candidate was returned with just 265 votes, representing only 25 per cent of the electorate. Nationally, only 23.5 per cent of the registered voting population is represented in the current parliament.

WPR: How big a problem is corruption in Vanuatu, and what impact is the current scandal likely to have on efforts to tackle it?

Brien: With loosely aligned coalitions engaged in a continuous process of negotiation to form and hold onto power, the temptation to shift allegiances for pragmatic gain is very high. Most often the incentive is the promise of a ministerial portfolio, which enables the apportionment of resources and jobs to political supporters. The current bribery case has confirmed a widely held perception that cash transfers are also a contributing factor in the reshaping of coalition governments. Until now, political horse trading has been somewhat accepted as a consequence of the systemic defects and overwhelming demands of voters. Perhaps the most surprising aspect of the current case is the fact that it was prosecuted in the first place. But now that it has, a national conversation is emerging about the inadequacies of a system that rewards just a few at the expense of the majority.

WPR: What are some of the major policy and development challenges facing Vanuatu, and how does corruption impact them?

Brien: As a young democracy emerging from the shackles of colonialism, Vanuatu is still forging its identity and building the state institutions necessary to deliver the basic services and infrastructure for the population to prosper. Many lament the impact of corruption and political instability on this process. While these factors undoubtedly slow the pace of development, they are not the sole forces conspiring against the establishment of a well-functioning nation-state. Resource limitations, divergent internal interests and competing external pressures amplify the country’s development challenges. But the current case has showcased that respect for the rule of law prevails, and that is what keeps the peace amid occasional political turmoil. Before laughing off the current situation, the international community should ask just how many established or emerging countries have managed such a demonstration that no one is above the law?