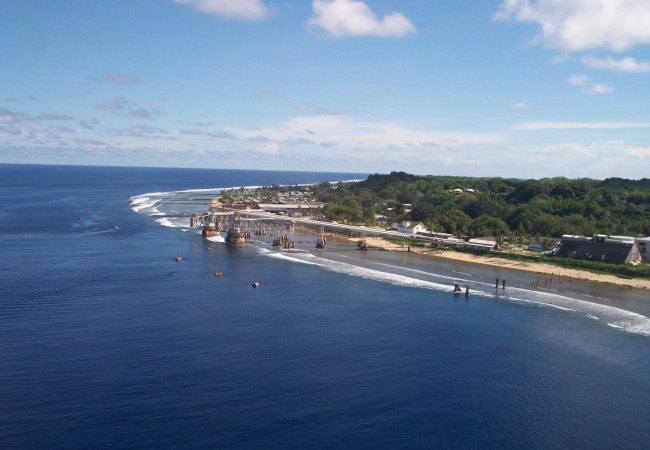 Nauru has been in the international media spotlight over bribery allegations, deportations of judges, a police commissioner and others, and the shutdown of Facebook.

Every week seems to bring a new revelation about un-democratic behavior by its national leadership undermining the rule of law. And despite denials this past week of bribery involving current Nauru government leaders by an Australian company, payoffs to political leaders are hardly a new phenomenon in Nauru, or indeed in the Pacific.

Should the region shrug this off as something we may not like, but it’s none of our business? After all, Nauru is just 10,000 people on a tiny bit of land in the central Pacific that, save for its now expanding Nauru Airlines, would be one of the most isolated countries in the world. In former U.S. Secretary of State Henry Kissinger’s immortal—if apocryphal—comment about Micronesia, ‘Who gives a damn?’

The Australian and New Zealand governments cared a lot about democracy, or lack thereof, in Fiji by imposing a slew of sanctions after then-Army Chief Frank Bainimarama’s coup in 2006. Many of these remained in effect for eight years until Fiji’s national elections last September. Nauru doesn’t have an army to mount a coup. Still, to date, Nauru’s current government has:

We might well ask, ‘what’s next?’ To date, only the United States government has issued a statement of concern over Nauru’s ban on Facebook.

“Nauru should revise its course of action.”

Why is the Australian government mum on the subject of Nauru? Radio Australia last week quoted Nauru’s former Solicitor General, Australian Steven Bliim, discussing Nauru’s sacking of its previous police commissioner as his investigation into bribery of Nauru leaders by Australian company Getax was advancing. Bliim also briefed Australian government officials after leaving Nauru last year. He was surprised by their lack of interest. “The reaction of the politicians at the time was dismissive, indicating that it was purely an internal Nauruan affair, which seemed at odds with the sort of reaction that was taken, for instance, when the Fiji coups occurred,” Bliim told Radio Australia. “This wasn’t as overt as what happened in Fiji, but the effect of it has been very similar where the country has failed to abide by its own laws and it’s effectively taken steps to make itself not accountable.”

The self-interest of the asylum seekers holding facility on Nauru is clearly the driver of relations between Australia and Nauru now. Nauru is receiving significant funding from Australia for hosting the controversial facility and the Nauru detention center is a key element in Australia’s policy for interdicting refugees aiming for Australia.

The Nauru government has taken to issuing terse statements critical of media reporting as international scrutiny of these issues has expanded. Among these denials includes the assertion this past week that Nauru’s legal system is arguably the most independent, transparent and credible in the Pacific. But this assertion is far from reality. In point of fact, a 2012-2014 governance and transparency assessment of the judiciaries in the 14 independent Pacific nations by the Pacific Judicial Development Programme gives Nauru one of the lowest ratings in the region. The Marshall Islands was at the top in both 2012 and 2014 by meeting all 15 agreed-to indicators for transparency and governance in court operations, and Palau met 14 of these in 2012 and 15 last year. Nauru, however, met only two in 2012 and as of the latest update in April this year, had not filed a report on these indicators for 2014.

A United Nations Special Rapporteur last month raised concerns about recently adopted amendments to Nauru’s Criminal Code, and called on the government to withdraw the legislation restricting freedom of expression. New amendments prohibit use of language that is threatening, abusive or insulting in nature and has the intention to stir up racial, political or religious hatred—which critics say could be used to muzzle political opposition in the lead up to next year’s election.

“Nauru should allow free space for expression without fear of criminal prosecution,” said Special Rapporteur David Kaye. “It should lift all restrictions to access internet and social media, and facilitate access to the media in the country. Nauru should revise its course of action and take measures to fulfill its human rights obligations.”

Unless Nauru’s neighbors, including Australia and New Zealand, get involved in encouraging Nauru to adhere to democratic norms that prevail in this region—including unrestricted debates in parliament, open access to the Internet, and maintaining an independent judiciary—it seems likely the government of Nauru will continue undermining opportunities for its citizens to enjoy freedoms taken for granted in most democracies. This should concern the Pacific Islands Forum, which brings together leaders, governments and island communities over shared goals of democracy, good governance and accountability. Ignoring developments in Nauru undermines the Forum and island leaders’ stated objective of promoting regionalism and raising the quality of life based on the Pacific’s commitment to sustainable development and accountability of governments to their citizens.