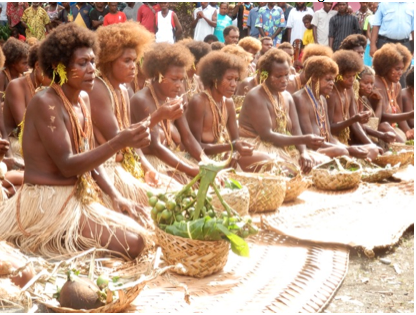 My name is Betty Lina Gigisi, and I’m from Bubutoha village, Malango ward, in Central Guadalcanal Province. There were seven children in my family. My mother and father were all from the same province and were subsistence farmers. Today I am a mother of four children.

I recently gained a scholarship to study a Certificate IV in Community Development at the Australia-Pacific Technical College and I feel so excited and privileged to be part of this course, and to be undertaking my work placement at the Pacific Institute of Public Policy.

My own back ground in working with communities is diverse with a focus on Peace and reconciliation, Gender Equality and Women in leadership and decision making.

As you will know, the Solomon Islands suffered through a civil war between 1999-2003, fought mostly between militants from Guadalcanal and Malaitans who had settled in Honiara and around Guadalcanal island. Guadalcanal militants wanted their kastom land back and were worried about the many Malaitans living there, some of whom were squatters, others of whom had genuine leases.

After the war, In 2007 a reconciliation ceremony was organised by the Ministry of National Unity Peace & Reconciliation at Peochakuri village, South Guadalcanal constituency. I was also in the ceremony not as an official, but as a citizen of that particular constituency and as a Gender Advocate. The women were not participating or recognized in the official program. They had no opportunity to express their emotional feelings to their government, as the Prime Minister was the guest of honour. The women’s participation was to deliver traditional garland to the official guests, and they were dressed in their traditional costumes, but were half naked. My question was – is that the only strength that women have?

I am proud of my cultural norms, but I would like to have a woman representative amongst the official guests, dressed according to custom. The women approached me to see if I could negotiate for a change in the program so that that women could be represented, allocated a time and have a voice to deliver their thoughts.

I prepared a media statement that highlighted my disappointment in the women’s participation in the peace ceremony. The statement came out in the media (Solomon Islands Broadcasting Corporations (SIBC) on 1st January 2008.

I have a strong belief in the rights of women to have a voice in decision making.

My specific role in the Commission was in the section that was responsible for the reunification of remains. As you can imagine the Exhumation of remains is a process that ends up with very painful and emotional feelings for all involved. Training for Exhumation officers, Forensic (Police officers) and the Solomon Islands Truth and Reconciliation Commissioners involved understanding the complex and sensitive nature of exhumation.

The process involved an invitation to relatives for a meeting to prepare them to understand and accept the process of exhumation. Also to let them know that we (SITRC) respect cultural procedures and that the SITRC was enacted in parliament in 2008 with a time frame of completion. The SITRC engages two qualified counsellors to do the healing process, as relatives receive counselling as part of their healing process.

One of my roles was to do grave mapping on the southern part of Guadalcanal Province, where most of the people were killed and buried. Before and after the grave mapping a cultural procedure must be introduced to calm their emotional reactions. Some are mass graves where there is more than one person in the grave.

In a village a mother came to express herself emotionally that she wanted her husband’s body returned in full; she got married to him in full and not just to the head alone.

The Commission worked with multiple stakeholders such as:

I have a strong belief in the rights of women to have a voice in decision making, especially since most of the Solomon Islands follows a matrilineal land system. Solomon Islands has three women only in parliamentary positions. Consequently in 2010 I stood for Parliament in the election in South Guadalcanal constituency and was unsuccessful, however I intend to stand again in the next election in 2018.

Over the next five months I hope to be able make a positive contribution to pacificpolicy.org and gain new knowledge and insights to inform my work and that will make a difference in the Solomon Islands.

I will write more around women’s issues and the work of the Truth and Reconciliation Commission that is doing much to help heal the wounds we suffered during the war.

Post Tagged: gender, peace and security
This article was written by

Betty Gigisi has worked across communities in the Solomon islands with a focus on peace and reconciliation, gender equality and women in leadership and decision making. She is currently undertaking a work placement at the Pacific Institute of Public Policy.