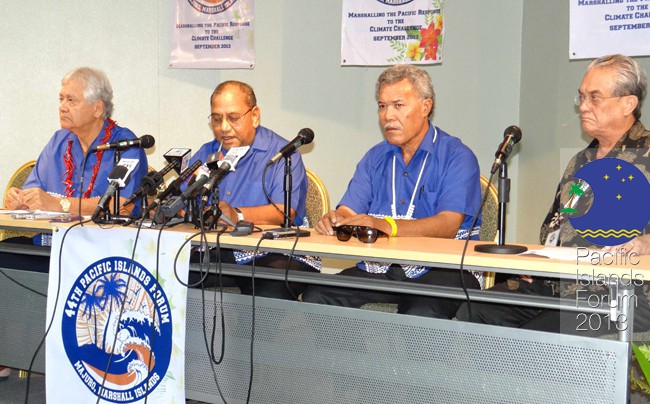 Given the Pacific Islands Forum meeting was anchored around the host government’s (Republic of the Marshall Islands) climate change initiative, it is staggering that the first reference to the Majuro Declaration for Climate Leadership is buried half way through the document.

The host government had even put its long-standing concerns about unmet compensation for nuclear testing on the backburner, to highlight its efforts in rallying international action on climate change. Lets hope Forum leaders now hold true to their promise to ‘stand in solidarity’ with the peoples of the Marshall Islands as they seek long overdue recompense for the continuing toll arising from the tragedy of nuclear testing.

In an act of confounding denial, the first communiqué item listed is a non-paragraph on the review of the Pacific Plan. Last year I criticised leaders for deferring any action on the significant reforms proposed out of the independent review of the Forum to tackle the growing perception that the once premier regional body is losing relevance and traction.

We were told then that we had to await a review of the Pacific Plan. Over the course of this year, Sir Mekere Morauta and his team have undertaken extensive consultations and an excellent in-depth analysis to deliver their preliminary findings and recommendations to this year’s meeting. Now we are told to wait at least another six months as officials consider the findings of the review team. Why? Perhaps it is a canny strategy, to run down the clock to the end of the current secretary general’s term. The organisation is in desperate need of an overhaul, including a restatement of core business and restructure of senior management. New leadership may pave the way to achieve this.

‘In an act of confounding denial, the first communiqué item listed is a non-paragraph on the review of the Pacific Plan’

In two weeks time world leaders will converge in New York for the UN General Assembly to discuss what comes after the Millennium Development Goals (MDGs) expire in 2015. The Forum communiqué delivers a weak message on what the Pacific’s priorities are for inclusion in that global discussion. There is no mention of climate change, ocean management, inclusive economic growth, peacebuilding, statebuilding and environmental  management. No mention of the need for a fundamental shift to rebalance the global development partnership. All of which have been raised in regional consultations.

As in previous years, the communiqué is notable for its tepid response and in some cases silence on key issues.

Not a word on the news out of Japan where radiation leaks from the Fukushima nuclear power plant threaten to contaminate our ocean.

Not a word on the most contentious policy issue in our region right now – the Pacific’s role in processing and resettling asylum seekers bound for Australia.

Not a word on West Papua or French Polynesia, despite the high profile these independence struggles have had over the course of this year.

Not a word on overfishing of our oceans, despite the mounting evidence of the environmental and economic catastrophe caused by foreign longline and purse seine fleets.

Once again, we are left looking forward to next year for some visionary leadership to emerge out of these regional political gatherings.

Will 2014 be the watershed year for the Forum? The ingredients are there – a new secretary general, the return of Fiji, a roadmap for reform of the institution and the Pacific Plan, and growing international interest in the post-Forum dialogue. Just mix, stir and serve.