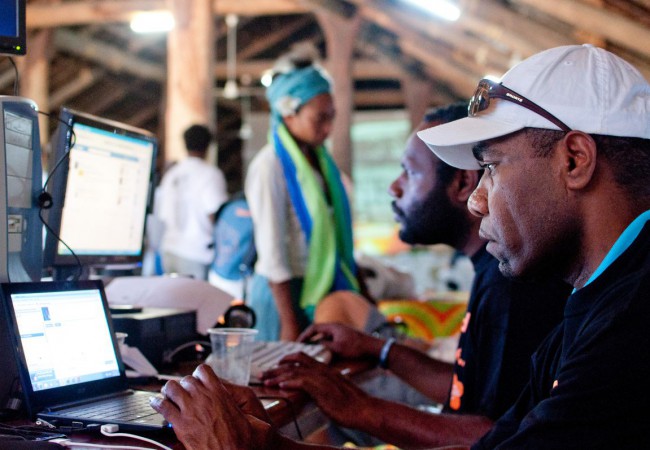 The last few months have seen mixed news concerning the strength and health of online society in the Pacific. While some countries have used their political will to embrace more open and accessible telecommunications services, others have sent decidedly mixed messages. The dynamics of Pacific politics and the internet are in some respects reflections of Pacific politics writ large, but in others they closely mirror strategic trends whose impacts are beginning to be felt globally.

In every case, however, the link between national political will and the health of online society is inextricable.

In Papua New Guinea, recent announcements by NICTA, the national telecommunications regulator, indicate a fundamental change in stance. Where before telecommunications regulation had been used primarily as a means of ensuring return on investment for vested interests, it is now clearly in the service of the people. Granted, simplified licenses, a more diversified market and less political meddling have made life much easier for telcos, but rulings in favour of infrastructure sharing and requiring equal access to international cable links have far-reaching consequences for consumers as well.

Possibly as a result of these decisions, Telikom PNG has just now announced that it is dropping its bandwidth rates by 68%.

In Solomon Islands, however, increases in the growth and health of the internet appear to be accruing in spite of relatively lower levels government action. Aside from statements by government figures chastising Facebook users for purportedly intemperate comments, official action in the telecoms field has been somewhat less than in neighbouring countries. Its recent investment in a municipal area network – tellingly, the largest ICT project undertaken so far by the government – is modest in comparison to public infrastructure investments made in smaller countries, including Samoa, Tonga and Vanuatu. In fairness, Solomon Islands has committed itself to obtaining a submarine cable for the nation, but power remains costly and unreliable, and internet prices remain high.

Civil society has shown a great deal more vitality. Forum Solomon Islands International, a Facebook group known by most simply as FSII, has become an important and influential actor in public dialogue. Earlier this year, it raised the ire of prime minister Darcy Lilo, who threatened litigation against the group following accusations of an extramarital affair. FSII has more recently partnered with Transparency International to petition parliament and has facilitated dialogue in the ongoing teachers’ strike.

Evidence of FSII’s growing credibility –and acceptance of this new reality by the political elite– can be found in Manasseh Sogavare’s recent invitation to FSII’s chief executive officer to appear before the parliamentary committee hearing into the controversial constituency development fund. FSII’s power as a representative group is, however, limited by very poor internet penetration outside of urban areas.

Vanuatu has seen consistent movement of late in terms of regulatory robustness and policy development, largely due to the consolidation of ICTs under the office of the prime minister. The recent change in government is not anticipated to have much effect on this progress, although the tactical kerfuffle preceding the changeover did have the effect of postponing the official opening of the first internet exchange point (or IXP) in any small island state in the Pacific. (Such exchange points allow domestic internet providers to connect to one another at vastly reduced costs.)

A recently concluded commercial agreement between the government of Vanuatu, PNG’s national provident fund and a domestic commercial entity appears to have finally resolved the impasse that blocked deployment of Vanuatu’s first undersea fibre-optic cable.

A new cable should have a salutary effect on pricing and bandwidth availability in the country, although it will take time for its full extent to become known. It appears as well that the government’s investment in the cable is indicative of an increased willingness to intervene in the market if it deems it necessary to increase the supply of bandwidth. To date, neither Telecom Vanuatu Ltd nor Digicel (Vanuatu’s two commercial mobile providers) have committed themselves to purchase bandwidth on the cable. Digicel is reportedly pursuing a region-wide agreement with O3B Networks, an innovative satellite service that promises much-improved performance and higher bandwidth volumes at price levels well below traditional satellite offerings.

Government influence can manifest itself at numerous levels. PNG and Vanuatu seem content to concern themselves with infrastructure and basic access issues. Fiji, whose success with infrastructure and access surpasses all other Pacific nations, is prepared to go much further. Over the last week or so, a series of briefly available news items on the Fiji Broadcasting Corporation’s website have indicated that the Financial Intelligence Unit at the Reserve Bank is not only actively monitoring internet traffic, but that it has already forwarded some intercepted data to the police. Two of the three stories on the website have since disappeared, replaced with a vague error message suggesting technical difficulties.

Coming as it does on tail of the interim government’s announcement that it would take its constitutional consultation process straight to the people via social media and SMS (as well as by more traditional means), one can only wonder what kind of chilling effect of such a story might have on the populace. Imagine, for example, an otherwise principled individual who had viewed naughty pictures in the past, suddenly wondering whether expressing a dissenting view on the constitution might result in his being ‘outed’ by the FIU.

The problem of monitoring traffic at the carrier level extends far deeper than that, of course. The danger of surveillance –for any purpose– at the telco level is that, in order to catch someone in a transgression, you have to watch every single bit of data, from every source, all the time. It’s akin to a drink-driving crackdown stopping every car on every road on every trip it makes.

And yet, the stage is being set for such capabilities to become the norm, rather than the exception. While it’s often characterised in rather alarmist terms, there is an ongoing push in progress to fundamentally transform internet governance. This could result in the current ‘engineering’ approach to internet management being replaced by a legislative/governmental regime. While there are valid arguments to be made for greater engagement by governments in telecoms and ICT in general, setting the current management structures aside could have severely deleterious effects.

It’s unfortunate, therefore, that much of the momentum for government engagement is being driven by a markedly unreflective drumbeat that so-called cybercrime must be dealt with. The need for a legislative response to certain problems is taken to be axiomatic by some, in spite of a dearth of supporting evidence. (The ASPI paper linked above, for example, contains numerous factual errors and makes several unsupported assertions.) Furthermore, any missteps in formulation of intergovernmental agreements concerning internet content could easily have the result of providing cover for the worst excesses in state surveillance, censorship and other invasions of privacy.

More than a few observers have suggested that it’s within a country’s prerogative to control access to information as it sees fit, and while they bemoan the worst abuses, they accept them as political, not technical problems. That’s all true, as far as it goes. Nothing in the current internet governance regime could stop, for example, a government from monitoring all communications. But there is a vast difference between accepting the world as it is, and legitimising its less desirable aspects.

The impact on the Pacific of this widening breach between governance philosophies has yet to be felt directly. Only two Pacific island nations attended the recent ITU-sponsored World Conference on Information Technology, and only PNG has signed on to the contentious treaty text that resulted in the US and dozens of other nations walking out of the proceedings. But the ITU is active in the region, and some countries have a more natural susceptibility to the anti-cybercrime drumbeat.

As with so many other issues, domestic concerns continue to trump international issues. So, while the world proceeds towards polarisation, Pacific nations find themselves aligned with one camp or the other more by coincidence than by deliberate choice. One only hopes that, as a new global order emerges, they won’t be surprised to find that the ground has shifted under their feet.