Charlot Salwai Tabimasmas is the eleventh prime minister of Vanuatu, having secured the support of 46 of 52 new MPS in the parliamentary vote on Friday. His election signals a new era in Vanuatu politics, with the majority of the 13 member Council of Ministers serving for the first time. After a turbulent few years, many are looking to the new leadership team to drive the reforms necessary to stabilise the political landscape and refocus government on service delivery and development. Reconciliation and unity are the starting blocks, and the new government will need to draw on the depth of talent available across both the front and back benches to tackle the challenges ahead. At the same time, the country will benefit from a focused and strong parliamentary opposition. PiPP executive director, Derek Brien, spoke with Pacific Beat about what the future holds – click on the image below to listen to the interview with ABC’s Richard Ewart. 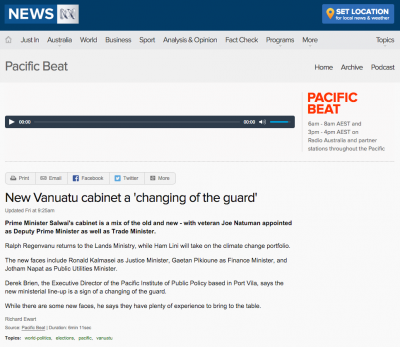