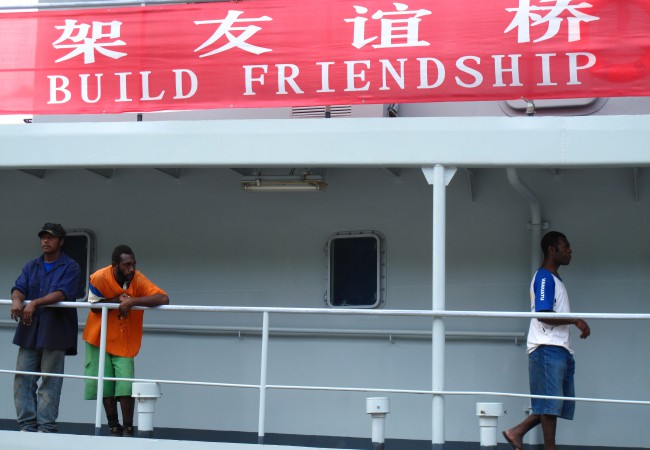 China’s President Xi Jinping was in New York to attend the summit marking the 70th anniversary of the United Nations in late September 2015.

He gave a speech affirming the achievements of the Millennium Development Goals (MDGs) over the past 15 years and also called for commitments and cooperation in the adopting and implementation of the post-2015 Sustainable Development Goals (SDGs).

“We should take it as a new starting point to work out a course of equitable, open, all-round and innovation-driven development in the interest of common development of all countries,” he said.

President Xi’s call for the international community to focus on implementation was clear and uncompromising.

He said: “The post-2015 development agenda is a high standard list of deliverables that carries with it our solemn commitment. It is often said that the worth of any plan is in its implementation. I therefore call on the international community to redouble their collective efforts for the joint implementation of the post-2015 development agenda in the interest of cooperation.”

Toward the end of his speech, President Xi stated that China is ready to work with “relevant parties to move forward” the implementation of the ‘Belt and Road’ initiative.

President Xi reiterated that China has basically realized the MDGs by lifting 439 million people out of poverty and making remarkable progress in areas of education, health and women’s welfare.

“China’s development has not only improved the well-being of the 1.3 billion-plus Chinese people, but also given a strong boost to the global cause of development,” President Xi said.

Since his speech at the United Nations, President Xi has gone on an official visit of the United Kingdom, not only engaging in trade and investment talks with the British government but also warmly welcomed by the pomp and ceremony of British royalty.

The media heralded President Xi as the most significant and most powerful Chinese leader since Deng Xiaoping.

The Belt and Road initiative

China has released a vision for peaceful cooperative development based on a two thousand year old trade route known as the Silk Road in which there were social and cultural exchanges linking the major civilizations of Asia, Europe, and Africa.

But what is different about the Belt and Road initiative and activities from that of the creation of another regional trade block with China as leader?

In early October, the Chinese Communist Party hosted in Beijing over 60 political party leaders and representatives from the Asia-Africa-European region, accompanied also by a media forum of journalists and media practitioners from the region.

The Belt and Road initiative proposed in Beijing 2015 was endorsed and adopted by the political leaders of the countries that met and consulted together in Beijing.

The Silk Road was a trade route that linked China and its immediate neighbors with the countries of Asia, Africa, and Europe. It is China’s pro-active attempt to build a Eurasian economic belt, and extend the Silk Road to the rest of the world, over land and sea.

But ‘Belt and Road’ is not just a proposal for cooperative economic partnership and development. China is already engaged in building infrastructure, creating a ‘Belt and Road’ fund and investment bank, creating many development projects, and more importantly establishing a consensus among the countries of Asia, Africa, and Europe, that Belt and Road is the pathway to the future.

With over 60 countries with political parties endorsing and adopting the Belt and Road Beijing initiative, the maritime ‘road’ that links to the Pacific islands is very much a part of this massive global plan for economic and social cooperative development.

The Belt and Road initiative is not confined to economic cooperative development but extends also to the social and cultural exchanges that would advance peace in a new world order.

Speaking in support of China’s efforts, Yong Rui, famed host of CCTV’s English Dialogue Program remarked in Beijing: “China is not just a major economic power. It is also a major civilization.”

The point is, economic development does not happen in a vacuum, but also allows parties to work together for the common good of their respective societies in every area of development ranging from sports and entertainment, cultural exchanges, as well as the advancing of common values that are part of social development.

Trade in the past two millennia was in silk, spices, porcelain, paper, noodles, and other things. But the Chinese have taken this concept and framed it into the Belt and Road initiative which will link not only the former regions of the Silk Road but all the countries of the world through the 21st century Maritime Silk Road linkages.

And even though the Chinese economy has slowed down from double-digit figures to a stable 6.5% growth, it is still the fastest growing economy, and is just behind the United States as the second largest economy in the world.

The Chinese still speak optimistically about this slowdown as a “cooling off” period to allow its economy to consolidate.

The Chinese insist that the Belt and Road initiative is not just another Chinese project but rather a peaceful cooperative development effort with other countries, working at a ‘win-win’ outcome.

As for what the Pacific region offers, we bring into the Belt and Road vision and partnership the world’s largest ocean, the world’s biggest tuna stocks, multi-billion dollar reserves of oil, gas and sea-bed minerals. And that is before we start to speak of tourism in one of the most beautiful and relaxing destinations in the world.

China and its larger development partners are also very aware of the fact there is marine wealth in the Pacific as well as something that money cannot buy – the relatively peaceful co-existence and relationships that are ever present in the Pacific region.

Each Pacific island nation will need to determine what and how to participate in the partnership, but there is also the need for collective dialogue and cooperation with China.

There is a lot that could be done to achieve a favorable outcome and due to the geopolitical power shifts taking place in our world today, our future may end up being defined by our partnership with China.