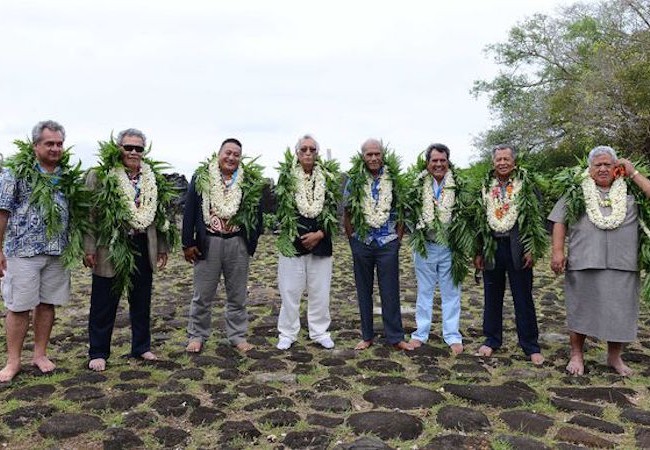 The Polynesian Leaders Group have issued an urgent plea for action as scientists, politicians and climate activists all over the world prepare to meet in Paris later this year.

“The Pacific Ocean is a vital regulator of climate for the whole world and needs a voice.  We, the Polynesian Leaders Group, are the voice for the Pacific Ocean, and wish to carry our strategic vision to deal with the adverse effects of climate change by limiting global warming below 1.5 (degrees Celsius) and having access to tools and means to adapt to the adverse impacts caused by climate change.”

The latest gathering of the Polynesian Leaders Group (PLG) have met in French Polynesia and issued the Taputapuatea Declaration demanding action to keep global land temperature rise at no more than 1.5 degrees Celsius by the year 2100.

Their leaders say that their collective EEZs amount to 10 million square kilometres and is one of the biggest carbon sinks in the world, like the largest forests. The full declaration can be downloaded from the Samoan government website.

Acknowledging their vulnerabilities, the declaration implores:

“We want the voice of the Polynesians to be heard at the COP21 in Paris with regards to the intensification of extreme weather events, the loss of territorial integrity, the displacements of populations, the deterioration of our natural and cultural heritage and the management of our common ocean.

We, the Polynesian Leaders Group, state that our islands and peoples are at the frontline of devastation from climate change.

We are victims of climate change. We must be heard. We call for justice and our right of survival.”

“Keep global land temperature rise at no more than 1.5 degrees Celsius by the year 2100.”

Their urgent appeal comes amid dire warnings from a new report by former NASA climate scientist James Hansen and 16 colleagues which claim that:

Glaciers in Greenland and Antarctica will melt 10 times faster than previous consensus estimates, resulting in sea level rise of at least 10 feet in as little as 50 years.

Despite Pacific islanders taking the lead on establishing renewable energy economies at home and demanding action on climate change internationally, they know little can be done to keep targets under 2 degrees if the big players – the US, China and India – don’t get serious. They are also disappointed that two of their most important Pacific partners, Australia and New Zealand, are currently ruled by conservative governments that are paying little more than lip service to climate change and appear to be hostage to the fossil fuel industry.

Australian Prime Minister Tony Abbott’s recent attempts to cut funding to renewable energy subsidies for solar and wind power, after scrapping the carbon tax on polluters, continue to outrage social and business commentators, even drawing criticism from fellow conservative politicians in the UK.

Aside from the Polynesian declaration, Micronesian leaders are also on the front foot, asking that any looming UN climate deal must be “shorter and clearer”.

“It should be something that people can understand, be able to work with and negotiate from,” said chief diplomat from the Marshall Islanda, Tony de Brum. As this article suggests: “the current version of the draft text is a bewildering 85-page list of options, incorporating the demands of the nearly 200 nations participating in the process.”

Tony de Brum is also named in this list as among the top officials currently working in climate change diplomacy.

France, as host for the 2015 summit in December this year, is mindful it does not want its Paris summit to be characterized by failure like the Copenhagen summit was in 2009, and has been spending diplomatic capital to bring various parties together behind the scenes.

France and the UN face a big challenge bringing the big emitters to some kind of binding agreement, but they will have the Pacific nations on side, as Pacific leaders fight to have their voices heard.

Post Tagged: climate change, polynesia
This article was written by