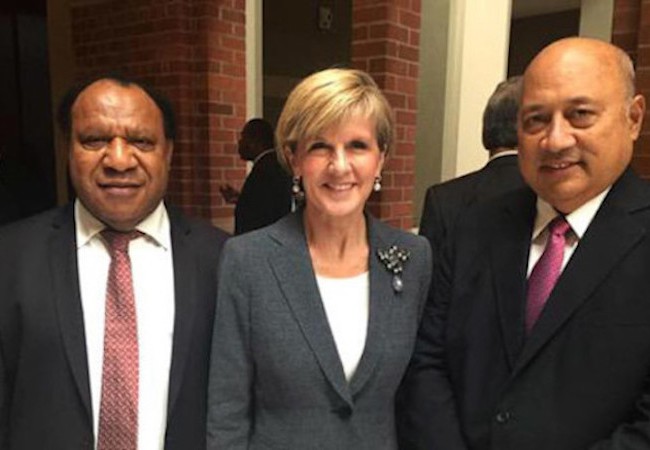 The Pacific Regional Trade Agreement (PARTA) was conceived in 1997 as a Free Trade Area (FTA) agreement for Pacific Island Countries (PICs), excluding Australia and New Zealand (ANZ). All were then members of the South Pacific Forum (SPF) which became the Pacific Islands Forum (PIF) in 2000. PIC trade officials were united on this radical shift in trade policy in the interest of closer economic integration amongst the PICs themselves. PIFS management was strongly supportive in that support came from then Secretary General Noel Levi and Multilateral Trade Policy Advisor at that time, Roman Grynberg.

This radical shift, however, rang alarm bells in Canberra and Wellington. According to Wesley Morgan (‘Negotiating powers: Contemporary Pacific Trade Diplomacy’): “Officials in both countries had long viewed a stable regional order in the South Pacific as a pre-eminent geostrategic priority. Australia provided funding for regional cooperation, at least in part, as a means of maintaining ‘a favourable strategic posture in the region’ (Fry 1981:480). Morgan adds: “Crucially, both countries aimed to be ‘considered by the Pacific states to be part of the region, and not part of the “outside” (ibid). If the island countries were to negotiate a trade agreement among themselves, particularly through the auspices of the SPF, this could be seen as undermining a carefully cultivated perception that they were legitimate ‘insiders’’.

In this divided scenario, ANZ pressed hard to be included in the PARTA. PICs, on the other hand, put their collective foot down to deflect the pressure from ANZ, even to the extent of rejecting an ANZ-drafted legal text. It was acknowledged at the time that what was driving ANZ was geostrategic concern rather than commercial interests; or as Myrburgh and Scollay put it in 2004: as being ‘driven by political rather than economic considerations’. This is contrasted with the PICs’ purely economic interests.

As it turned out, a compromise was struck: PARTA became PICTA for PICs only and PACER was conceived as the economic framework agreement between the two parties. PACER later gave form to PACER Plus (still under negotiation) as the FTA between ANZ and PICs. The two-tier outcome can be seen therefore as the jointly-agreed verdict whereby the PICs’ economic interests were confronted by the geostrategic (political) interests of ANZ.

Fast forward to 2015, we see a slightly different situation where the political interests of both parties are now thrust forward, and the question of ANZ’s perception of being legitimate insiders has come to the fore once again. Political interests are thus at loggerheads even though Fiji stands alone in proposing a reconfiguration of the regional architecture essentially for political reasons. Alarm bells again have been ringing for sometime especially in Canberra, again for the same political reasons that had prevailed way back in 2000.

Prima facie, it may be asked: why should ANZ bother? The PICs are not united this time around. Fiji stands in splendid isolation from the rest as the odd person out. Whilst two PIC leaders have spoken unsupportively of the Fiji’s initiative, others have not spoken one way or the other. It can also be envisaged that a majority decision can always override any recalcitrant in any case. However, the pursuit of this matter at a high level and the ardour with which it is treated is evident enough that there are considerations of prospective regional and collective risks involved in any exercise of majority decision; and the alternative of persevering towards a more acceptable resolution in the interest of regional solidarity is by far the best way to proceed.

The decision to prolong the status quo is going to be costly.

However, to proceed as envisaged above is still without challenges. It can be seen, for instance, that purely on the strength of lack of unity on the part of the PICs, and on the precedent of 2000, it can be said that this proposition by Fiji is unlikely to see the light of day.

However, we are dealing here with weighty political issues at loggerheads, as perceived by both parties and which have great and critical implications on the coherence, utility and sustainability of the region and on regionalism. As such, the precedent arising from the PICs defiance of 2000, whilst instructive, may not necessarily be prescriptive. Being instructive merely lends itself to being an option amongst many. It follows therefore that a possible outcome from the current situation is far from certain.

One possible outcome of course is that the Fiji initiative is rejected; and the status quo prevails. That decision was not taken in the Sydney meeting last week since other issues besides the reconfiguration of the regional architecture were discussed. The decision may be taken at the PIF Leaders’ meeting in Port Moresby in early September. The decision to prolong the status quo, from the perspective of Pacific regionalism, is going to be costly for the region. That decision may indeed bring to a close Fiji’s insurgence in remapping the regional architecture. However, it will only be the beginning of further regional woes, unprecedented to some extent, to constrain our regional efforts.

For all intents and purposes, it can be envisaged that the two-tier structure, representing PICTA and PACER, which can be reflected in a new regional configuration comprising a forum for PICs only, on one hand, and another forum for PICs-ANZ, on the other hand, still presents itself as an option available. If it gets the nod, it might go some way in meeting Fiji’s requirements; and Fiji could consider completing its return to the regional grouping that has already lifted its (Fiji’s) suspension.

In any case, this option is reflective of the structure that existed way back in 1971 at the start of the SPF when two caucuses existed – the island countries caucus and that of ANZ. Professor Fry had already identified this as a possible option for the regional reconfiguration exercise in an earlier DevPolicy blog. However, this two-caucus structure only lasted a year. They both came together the following year and the single caucus has prevailed since. By way of precedents alone, this fact suggests it may be a stillborn idea. However, it should be noted that immense changes have taken place in the PICs since the early 1970s, how the region is perceived by the global community and in return, how the PICs project themselves and their issues in global arenas. Parameters for assessing and evaluating ideas and norms have undergone irreversible transition. No doubt the discourse around including Australia and New Zealand in Pacific regional architecture continues for now and may come to a head during the upcoming PIF meeting.