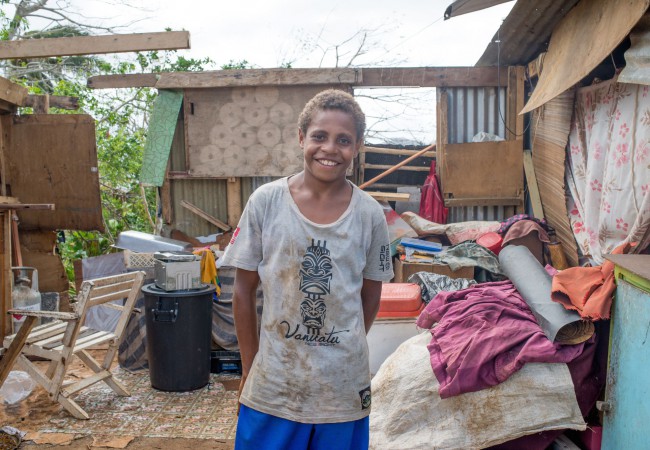 Yesterday, during an interview for a documentary film about climate change, I was asked how Vanuatu came to be known as the Happiest Country in the World. On the face of it, the title is quite apt. Wherever you go in Vanuatu, you will find smiling faces, warm welcomes and open hearts.

Even in the aftermath of cyclone Pam, which directly affected half the population and badly damaged dozens of their islands, Ni Vanuatu people still managed to smile and laugh. I confess that even after a decade living here, I found it astonishing that people would show such grace in the face of adversity.

In the badly affected Malapoa Waetwud neighbourhood, a man calmly described how he and his family would live off fallen fruit for a few days, then they’d dig up whatever hadn’t rotted in the ground; but after that, he wasn’t sure where the next meal was going to come from. On the southern island of Tanna, which was utterly devastated by 230 Kph winds, I sat with a group of mamas in the shade of the only remaining tree trunk in that part of the village, and we laughed and gently teased each other as we passed the time.

And it’s not that they were oblivious. On the contrary. Only half an hour earlier a village elder came up to me, looked me in the eye and spoke with brutal simplicity: ‘I nogat wan samting.’

It took me days—weeks to be honest—to understand how people could remain light-hearted in the face of the loss of everything of value in their lives.

The penny began to drop when I visited Cildo (pronounced SEEL-doe) and his parents in Erangorango, in the foothills overlooking Port Vila. Cildo is a sturdy, plain-spoken, twelve-year-old boy originally from Malekula. His family home had been utterly destroyed by a massive tree which fell at the height of the storm, injuring his father and barely missing Cildo and his mother. I interviewed him for UNICEF, as part of a series of videos taking stock of the effect of the storm on children in Vanuatu.

When the cyclone came we went inside and ate, then we all went into one room. Then a tree fell onto our house, and we all sat in the remaining corner until morning.

That’s it. Plain facts, delivered without inflection or stress. And when I took his photo standing in the ruins, he flashed the brightest smile.

It was only a couple of weeks later, as I was reviewing all the shots I’d taken in the days following the disaster, that I realised his secret: You don’t need a reason to be happy.

Transactionality and causality are so deeply ingrained in the western European psyche that it comes as a revelation that actually, happiness does not need to be pursued. It can be found wherever you happen to be standing.

The rootless and sometimes purposeless nature of consumer societies often stand in the way of such realisations. For my part, I spent the better part of my childhood coping with damage that never should have happened, and spent my young adulthood as a half-formed Angry Young Man. I was ruled by surges of anger, righteousness and cynicism, until circumstances finally forced me to conduct an existential stock-take.

By the time I arrived in Vanuatu in 2003, I was ready to learn. And before eighteen months had passed, I knew that this is a place where I could be happy. I could be happy, not because things are better here; in many ways they’re not. I could be happy because I no longer needed a reason.

I’ve been stuck in cyclones, got malaria, dengue, been hospitalised from the after-effects of prolonged dehydration, had more parasites in more places than anyone really wants to know. I’ve been stung by things straight out of a Tim Burton movie. I’ve had death threats and constant, insanely unreasonable demands on my time and my pocketbook.

And yet, and yet in spite of it all, I was happy. Further back, in 2008, on the event of the perfectly preventable death of a little boy, I wrote about his funeral:

To an outsider, it’s wildly incongruous to watch the mourners as they approach the deceased’s house, chatting quietly, even laughing amongst themselves as if on some innocuous errand. The only clue about their destination is a cloth draped across one shoulder, to wipe the coming tears.

At the very instant they reach the gate, the wails begin. They are contrived, it’s true, but utterly heartfelt. The display of pain and sorrow at a funeral is more than most people of European descent have ever seen. To hear women moaning and weeping during the vigil and the burial is an uncanny and deeply moving experience. Though ritualised, the depth and sincerity of the emotion is starkly undeniable.

And then, as quickly as it begins, it is done. Life goes on, there’s food to be cooked, children to be tended to, and laundry to be done. The laughter, the scolding and the [conversation] start up again, as they always do.

Everyone in Vanuatu understands the place of things, and the need for everything to be in its place. Respect for public display and private observance of all of life’s events is universal. If someone smiles and jokes with his friends and colleagues just days after his first-born son has died… well, that’s as it should be. The funeral is over, and though there will be other opportunities to look back and mourn over the next hundred days, life goes on, whether one wants it to or not.

But it took a decade—and a cyclone of historical dimensions—for the lesson finally to land: People in Vanuatu are not happy because of anything. They are happy because the alternative doesn’t bear considering. Living as they do in a Least Developed Country with little or no modern technology in village life, with death and disaster around every corner, and people with whom you might or might not get along tucked up nice and cosy next to you (and you’re on an island, remember; they’re not going anywhere)… well, the least you can do is have a laugh now and then.

Vanuatu’s designation as the happiest place on earth was the result of research conducted by the New Economics Foundation, a UK-based think-tank. Their Happy Planet Index actually placed more emphasis on the happiness of the planet than its people. It is a measure of people’s well-being in proportion to environmental footprint. Vanuatu was included in the inaugural 2006 survey, but not in any subsequent studies.

Still, the title endures because it fits. And now, as we face the impact of the developing world’s environmental footprint in the form of rising ocean levels and storms of unprecedented severity, this ability to be happy in the face of adversity will no doubt serve us well.

But don’t for a minute let that lead developing countries to complacence. Just because we smile our way through the hardship doesn’t mean that life is easier here. It’s not easier at all; it’s just better.

And honestly, developed nations would do well to take a lesson from this. Disasters wrought by climate change are inevitable now. The damage is done. The storms will reach you too. You’d better learn to smile through adversity as well, because you might not have much else to smile about.