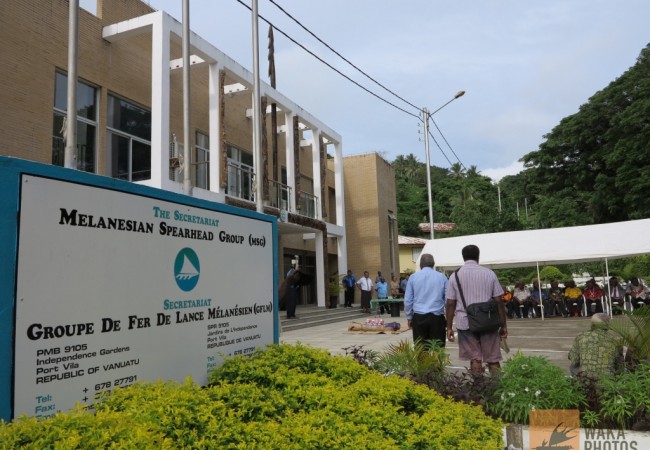 I had intended to write my next blog on an article reported in PacTrade on 9 February 2015 attributed to PIFS Secretary General: ‘Dame Meg calls for greater regionalism‘. But I changed course advisedly when asked to give some thoughts on the sub-regional architecture (internal relations amongst members states in MSG) in view of new leadership at PIFS: thus the heading.

The optimism implied in the heading is based on objective criteria rather than on flimsy cogitation. The MSG has just launched its 2038 ‘Prosperity for All’ Plan. The Plan takes cognition of the strengths and competences derived from the MSG’s first 25 years of existence. It frames all these with the Group’s renewed determination and vision for the same period into the future, akin to what some have termed as its renaissance. The Group clearly sees itself as a sub-region within wider Pacific regionalism. Given the relative strengths of its economies, land masses, natural resources and population, it is difficult to fault its optimism.

Apart from taking full advantage to develop optimally its own economies, the MSG’s plan proposes to collaborate and form solidarity with other sub-regional groupings in the Pacific, with the CROP agencies and also to reach out to other PSIDS (Pacific small island developing states) by way of joint development initiatives, e.g. in climate change and fisheries, and to also share with fellow PSIDS burdened with scarcity of resources, the surpluses of its development and economic growth.

The Group has gone beyond just cogitation. Its MSG Trade Area agreement has reduced to zero an increasing number of import tariffs; investment capital, skill and unskilled labour are beginning to flow across national borders; a new commercial arm for the Group will be established soon, and PNG is re-writing the ODA handbook by becoming a donor herself and thereby starting to make good strides as regards the Group’s objectives under its new plan.

In pursuing the sub-regional role under Pacific regionalism, the Group is adamant in providing the leadership that is needed in the region to move developments to new heights. Such pursuit is driven by a firm belief that if the Group is strong and effective at the sub-regional level – on its own, or in solidarity with other sub-regions or with CROP agencies, this will strengthen the larger group in due course. No time is better than the present to exercise such leadership; and PNG is ideally placed to take up this challenge, on behalf of the Group.

PNG will be the next Chair of the Forum and its political head. Dame Meg Taylor is the principal captain of the regional ship of states, the Forum Secretariat; and fellow PNG citizen, Molean Kilepak is the Deputy Director General of the MSG’s Secretariat. The powers that be in Port Moresby have a great opportunity to make a difference in the region by bringing about coordination and collaboration of these regional, sub-regional and national stakeholders and thus achieving augmentation and complementarity of issues in the greater interests of the region. MSG’s Director General, Peter Forau, former Secretary General of the Forum Secretariat, is a force behind the scenes, offering solid advice that had been tested and molded through years of experience as a top regional civil servant.

Pacific regionalism is in dire need for such coordinated leadership now. The new Framework for Pacific Regionalism has been launched and a number of activities recommended under the Framework have yet to be implemented. Further, a new regional architecture is going to be discussed soon by the Leaders in a meeting to be convened by Australia. The latter can bring about new changes and demands that will bring greater focus on the role of the sub-regions, as building blocks, for Pacific regionalism, whatever the new regional architecture is going to be. MSG, again, can and will be in the limelight to respond to this role. It is conceivable that MSG, given its relative strengths, resources and capacity for innovation, may see itself as a guinea pig for the larger group to trial certain issues/features in order to determine their workability and optimum modality before they are introduced at the larger regional level. Such trialing is essential as a means of securing tested experiences and competences on traditionally problematic issues before introduction as firm regional policies.

The opportunity for MSG’s leadership to drive Pacific regionalism across the board is being presented. It needs to be effectively coordinated. Moreover, the opportunity needs to be converted to benefits to be utilitarian. PNG’s principal stakeholders have this opportunity to exercise the leadership needed. MSG is on a roll, PNG likewise; and all PNG has to do is to continue its leadership to ‘run with the ball’ at the sub-regional level; and from its vantage point, coordinate with the activities at the regional level, and through its political leadership of the Forum, as the incoming-Chair (2015-2016), seek the fullest cooperation from national leaders, fellow decision makers and leaders at the region level.

There are challenges of course – firstly at the sub-regional level. MSG leadership, for example, was found wanting when Fiji and Solomon Islands had a dispute arising from aviation rights between the two countries and their respective airlines. This seems to have sorted itself out. However, a new aviation partnership announced on 12 February amongst Solomon Islands, PNG and Vanuatu left Fiji out of the equation. Perhaps there is more to follow.

In anthropology, the concept of a ‘Big Man’ refers to an individual who is highly influential. He may not have formal tribal authority, but he can maintain recognition through skilled persuasion and wisdom. PNG is one ‘Big Man’, not only in the sub-region but also in the wider region as a whole. The opportunity of leadership it faces today can be equated to having come to the crossroads where the baton of leadership awaits. PNG needs to cross its rubicon and commit itself anew to MSG sub-regionalism and Pacific regionalism. Then the ‘Big Man’ of the region can take the rest of us to unprecedented new heights.