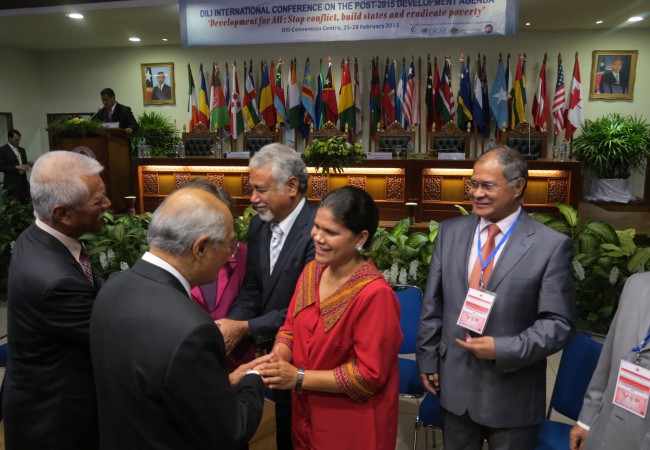 A distant debate on the global agenda for sustainable development may seem far removed from the day-to-day realities of Pacific island countries, but it is an important discussion and one which will shape the way the rest of the world engages with the Pacific over the next decade or so. It is also an opportunity to get the rest of the World to pay attention to the issues that matter most to Pacific Islanders.

In 2000, most of the world’s countries, including Pacific island nations, signed up to an ambitious development agenda—the Millennium Development Goals (or MDGs for short)—which set poverty reduction targets to be achieved by 2015. There were seven goals that corresponded to various dimensions of economic and social development and an eighth goal that put in place a global partnership to accelerate development efforts.

Fifteen years later much progress has been made: many of the goals have been met (if not at the national level, then at a global level), many lessons have been learnt, but a lot more remains to be done.

It is against this backdrop that experts have been meeting in New York and around the world to discuss how the sustainable development agenda should be taken forward during the period 2016 to 2030. The plan is for United Nations General Assembly to formally adopt the Sustainable Development Goals (SDGs) in New York later this year.

Unlike other global fora, such as the World Bank, IMF or G20, where the Pacific has little or no voice, the United Nations General Assembly provides the equal voting rights for all countries, so Vanuatu, for example, has the same number of votes as much bigger countries such as Australia, the UK and the US.

This is important, because it means that small island states can potentially have a big say on global issues, and that is what the Pacific Institute of Public Policy has been supporting over the last year: bridging some of the distance between the Pacific and the debates in New York.

As ‘Open Working Group’ has help the United Nations to put forward a proposal for 17 Sustainable Development Goals, which are listed below:

At first sight the proposed goals and targets are a bit cumbersome, but they are ambitious and broad and build upon the MDGs.

Building on MDGs. Those familiar with the existing MDGs will notice straightway that many of the goals build on MDG targets: for example halving income poverty has become ending poverty in all forms, universal access to education has become quality education and lifelong learning for all etc. (For those interested in seeking how the SDGs compare to the MDGs, the diagram below provides a useful summary that you can explore further.)

A broader development agenda. The proposed SDGs are much broader than the MDGs, including more extensive goals and targets on climate change, environmental issues, including for managing forests, oceans, and marine resources. It also fleshes out in more details what is required to support economic growth, as a foundation for sustainable development.

Clearer intermediate steps. One of things that some commentators didn’t like about the MDGs was that they focused too much on development outcomes and not enough on the actions required to achieve them. This is being addressed in proposed SDGs through explicit goals on the steps for achieving development outcomes (e.g. improvements in governance and investment in infrastructure, including energy) as well as intermediate outcomes (such as economic growth) Whilst some might argue that this has made the SDGs more cumbersome, it also makes them more relevant and practical.

Global partnership. A big step forward, from a developing country prospective is that there is much more meat on the ‘global partnership’. In particular, it is good to see that the 0.7% of GNI target has been included in the goals themselves—though whether countries ultimately sign up to this or deliver it remains to be seen. The UK has enshrined the 0.7% target in law, whilst Australia has retreated the other way in the last year. From a developing countries perspective, and for NGOs, it will be important to keep pressure on rich countries to (re)commit to the 0.7% target—as an easily verifiable indicator of a global partnership. But more importantly will be the improvement to the ‘quality’ of aid, and ideally this would involve an overhaul of aid modalities and their archaic architecture—something that the IFIs, UN and donors themselves have long struggled to do.

Beyond aid, there is a lot more that can be done to improve the way that capital is allocated and used globally: action on money laundering, tax evasion, transnational crime, regulation of banks, as well as corruption in both developed and developing countries. These are not new items on the global agenda, but ones that sovereign states and global agencies have been either unwilling or unable to address—collective action on the provision of such global public goods (and others such as conflict prevention and climate change mitigation) are a core weakness of the UN/IFIs etc.

The proposed SDGs and the ideas on financing for development are a good starting point. They set out a bold vision for sustainable development, and without doubt the world has the resources and the know-how to make it a reality, but the question remains whether global institutions and sovereign states can rise to the challenge—the world will be a much better place if they can.