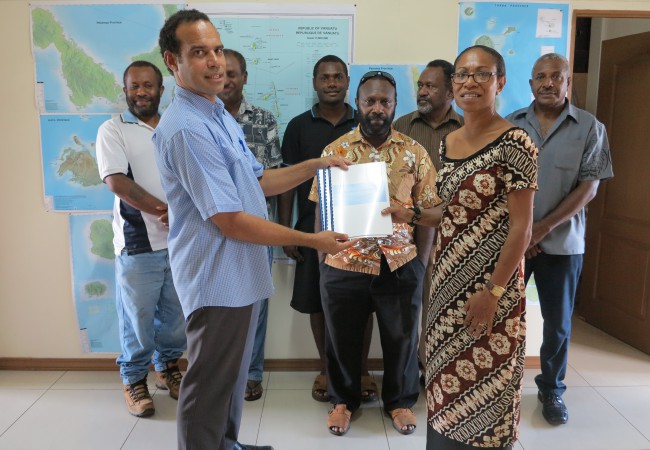 A report on the Vanuatu Government’s consultation on deep sea mining (DSM) has been presented to the Vanuatu Lands and Natural Resources Minister, Ralph Regenvanu, and other government officials by the Pacific Institute of Public Policy (PiPP).

The report urges wider community consultation and analysis, and invokes the ‘precautionary principle’ when dealing with such a new and little understood mining business. It highlights the many conversations and concerns raised during an initial public consultation held at the Chief’s Nakamal in October 2014. Vanuatu has had little experience of mining compared to other Pacific nations, so there is a need to learn from the experience of others in the region and develop a whole of government response to fully weigh the costs and benefits.

There are currently 154 underwater exploration licences in Vanuatu at a time when many countries in the Pacific are being courted by mining companies to harvest rich undersea minerals. The report asks whether governments and communities are ready to handle the many associated issues ranging from consultation processes, to legislation, environmental protection, tax policy, kastom, maritime boundaries and capacity constraints.

The Vanuatu government requested PiPP to be an independent observer at the first consultation and provide a report outlining many of the issues involved so that Vanuatu can develop good public policy around this contentious issue.

‘I am delighted to present this report which is appropriately called “Starting a dialogue”. Vanuatu has the benefit of navigating its overarching strategy to match the sentiments of its people who are right now saying they want to find out more about deep sea mining and what it might mean to their kastom and livelihoods into the future.’

‘We suggest the need for wide community consultation and for government to carefully identify all the policy areas involved so it gets a good deal if mining proceeds and the national interest is protected.’

Mr Regenvanu thanked PiPP for its report and said government was developing a framework for further public consultations.