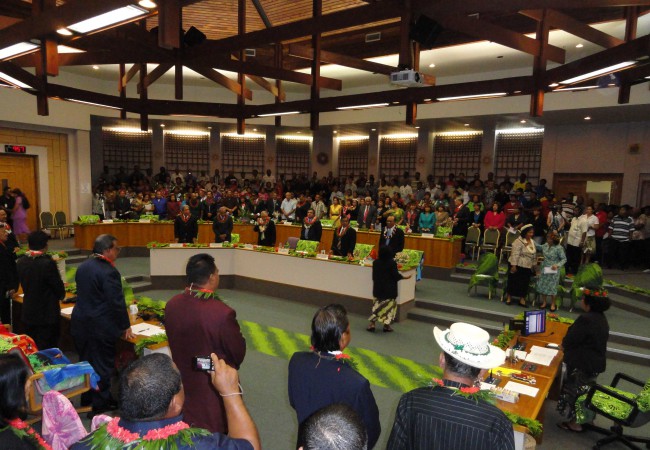 Among Pacific island nations, the Federated States of Micronesia and the Marshall Islands rank worst and next-to-the-worst, respectively, in “ease of doing business,” according to the World Bank in its latest “Doing Business” report for 2015.

Three of the seven Pacific nations evaluated by the U.S. State Department for Trafficking in Persons are on Tier 2 Watch List or Tier 3—indicating countries that are not in compliance with minimum standards under the U.S. Trafficking Victims Protection Act (TVPA) of 2000. This includes Papua New Guinea (Tier 3) and the Marshall Islands and Solomon Islands on Tier 2 Watch List.

Of the 14 Forum island countries, only five—Cook Islands, Fiji, Niue, Palau, and Tonga—are on track to implement a majority of the seven millennium development goals by next year, according to the Pacific Islands Forum. The other nine are managing to make progress on only one or two MDGs or, as with Papua New Guinea, are off-track on all seven.

Are these reports useful to Pacific island governments? Do they contain information that should be used by individual governments as a basis for improvement?

The short answer is, “yes.” Since performance audits tend to be few and far between, how islands are doing in development, business, trafficking, health and education are key public interest questions. Trying to outrank developed nations that are in the top 10 of various global studies is not a likely scenario for any island nation. But moving from the bottom half of a list to the top half shouldn’t be out of the realm of possibility for many islands in our region.

One of the challenges is that while there are now reams of data available on country performance in every category—both from these international rankings and from domestic planning and statistics offices—political leaders in many island nations grew up in an era where there was little data available and decision-making based on performance indicators and information was virtually impossible. So decisions were made based on whatever set of assumptions leaders brought to the table.

‘One of the challenges is that while there are now reams of data available on country performance in every category, political leaders in many island nations grew up in an era where decision-making based on performance indicators and information was virtually impossible.’

Today, United Nations agencies and big donors in the region such as the United States, Australia and Japan are all aiming for performance, poverty reduction, and invigorating moribund economies heavily dependent on donor aid and government employment. Yet many of our decision makers discount the data being provided.

A classic example was the report for the Marshall Islands, “Juumemmej: Republic of the Marshall Islands Social and Economic Report 2005,” which was attacked by the country’s ruling party in parliament for bluntly talking about poverty and other social problems in the country. Despite the presentation of significant data to support its observations and recommendations, the report was largely discounted by political leaders.

Occasionally, however, governments use these performance reports to galvanize action. In the late 1990s, the Marshall Islands was placed on a global money laundering blacklist by the international Financial Action Task Force (FATF). Because of the significant harm this blacklisting had on banks and business and government operations in the country, an inter-agency group was organized to address the problem. The government brought together such entities as the Banking Commissioner, local banks, National Police, Attorney General’s office, Trust Company of the Marshall Islands (which manages a ship registry and an offshore corporate registry) to deal with the FATF report. It took about two years of concerted legal work, updating laws, putting various anti-money laundering mechanisms in place, training police to investigate financial crimes, engaging with the international community on the issue, and so on. It produced a positive result: the Marshall Islands was removed from the blacklist and has stayed off because of continued engagement.

During November, a newly established government Office of Commerce and Investment in the Marshall Islands called together government ministry and agency representatives and also local government mayors to review the World Bank’s Doing Business report 2015 on the Marshall Islands. There is no reason the Marshall Islands couldn’t have a better ranking in the World Bank’s Doing Business report. But government legislation, policies and actions are what determine the ranking. What businesses need—Pacific wide—is not more rhetoric from government about how it supports the private sector. They need government agencies and departments to work together to streamline and improve their operations to make life easier for businesses, and put the needs of the private sector, not their government offices, as the priority.

The Office of Commerce and Investment’s proactive response to the World Bank’s report card on doing business in the Marshall Islands is one of the only a handful of times over recent years that the government has taken steps to address this type of performance evaluation. Often, task forces have been established by government, research conducted, reports written, recommendations submitted. And then—nothing. The reports are simply ignored and time renders them moot.

No doubt this situation is hardly unique to the Marshall Islands. Whether proactive government agencies or those in the non-government sector can get the support at the political level to make legislative and policy changes needed to improve government services and performance only time will tell as the information and performance era is up against the thinking of many politicians who are not prone to taking action based on words in a report.

Post Tagged: internet, micronesia, politics
This article was written by