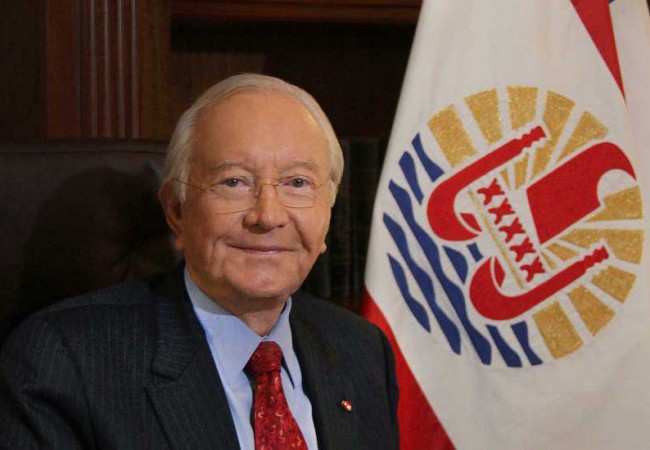 Gaston Flosse, one of the Pacific’s longest serving politicians, has been removed from office as President of French Polynesia, after exhausting all avenues of appeal against his conviction for misappropriation of public funds.

But while Flosse is out of office, he’s not out of power. Today, Flosse’s Tahoeraa Huiraatira party still maintains significant control at all levels of government in French Polynesia. This ongoing influence means that French Polynesia is finding it difficult to develop new development paradigms to address long-standing economic challenges.

While defeated in 2013 elections for French Polynesia’s local Assembly, independence leader Oscar Manutahi Temaru has been successful in mobilising greater involvement by international organisations to monitor developments in French Polynesia. The United Nations Special Committee on Decolonisation, the Pacific Islands Forum and Pacific governments have all joined the debate over French Polynesia’s future political status.

Gaston Flosse is a fierce opponent of independence for French Polynesia and has long championed France’s 30-year nuclear testing program.

Flosse was first elected as head of the district of Pirae in 1963, and continued as the mayor of this township until 2001. He served in French Polynesia’s local assembly from the early 1970s and came to office as the head of the local executive in 1982, after the electoral victory of his Tahoeraa Huiraatira party. When this post was transformed into the presidency under French Polynesia’s 1984 autonomy statute, Flosse served as President on and off for 30 years.

In 1978, he was also elected as a member of France’s National Assembly in Paris, serving in this position for a decade. In 1998, he was elected as a Senator in the French Senate (although over the last year, Flosse was the only Senator not to attend a single sitting!).

In an unexpected electoral victory in 2004, Oscar Temaru of the Tavini Huiraatira party led the Union for Democracy coalition (UPLD) into office. However Temaru was unable to govern French Polynesia for an extended period, hampered by a combination of ministerial inexperience, systematic opposition from the French government and the adverse economic impacts of the global financial crisis in 2007-08.

During the decade after the 2004 election, the leadership of French Polynesia changed 11 times, with the presidency passing back and forward between Temaru, Flosse and former Flosse ally Gaston Tong Sang After this decade of political instability, Flosse returned power in the May 2013 elections, winning 38 of 57 seats in French Polynesia’s Assembly.

This significant political comeback was soon overshadowed by the President’s fragile legal position. Flosse was a close friend and political ally of former French President Jacques Chirac, but the election of Presidents Nicolas Sarkozy in 2007 and Francois Hollande in 2012 weakened his political protection by the French state.

In 2012, President Flosse received a four-year suspended prison sentence, €125,000 fine and three years loss of civic rights in a case of “ghost employees” (just one in a series of administrative and criminal cases before the French and Tahitian courts). Because of his age, Flosse did not face imprisonment, but the loss of civic rights would make him ineligible to serve as President.

During the decade after the 2004 election, the leadership of French Polynesia changed 11 times, with the presidency passing back and forward between Temaru, Flosse and former Flosse ally Gaston Tong Sang.

In April 2014, the French Senate lifted his parliamentary immunity, opening the way for the application of his sentence. After a legal appeal to the Cour de Cassation in Paris was rejected in July 2014, Flosse appealed for a presidential pardon from President Hollande. However the Socialist Party leader refused to grant this pardon and on 5 September, the French High Commissioner in Papeete announced that Flosse would be removed from office.

Flosse’s longevity in office was based in part on a significant system of patronage, which drew on the significant financial grants provided by Paris each year. In France, however, the Flosse machine has been widely criticised as a symbol of the maldevelopment often seen in France’s overseas collectivities. An unauthorised biography in 2013 dubbed Flosse “the man who would be King” and the outgoing President has threatened to sue journalists who have reported on the JPK scandal in Tahiti (with legal authority is investigating the role of Flosse’s GIP security force in the 1997 disappearance and presumed death of Tahiti-based journalist Jean Pascal Couraud).

The removal of Gaston Flosse from office in September has not meant the end of his influence. Flosse has since been appointed as a consultant to the French Polynesian government, which has provided him with an office in the local Assembly building.

Over the last 18 months, the Tahoeraa party extended its power at all levels of government. Tahoeraa’s majority after the May 2013 Assembly elections ensured that Flosse’s former son-in-law Edouard Fritch was chosen as the new President of French Polynesia. Long serving Flosse ally Michel Buillard serves as Mayor of Papeete, the French Polynesian capital.

Flosse lost his post as one of French Polynesia’s two representatives to the French Senate just days before the positions were re-elected in September 2014. Flosse was replaced by Teura Iriti, who has been a member of the Tahoeraa group in French Polynesia’s Assembly for over a decade, and recently served as Flosse’s Minister for Welfare. The Tahoeraa majority also ensured certain defeat for Senator Richard Tuheiava of the UPLD opposition. Tuheiava’s replacement, 33-year-old Vincent Dubois lives with Flosse’s youngest daughter and previously served as one of his lawyers.

The replacement of Richard Tuheiava removes a critical voice from the international scene, as the young Senator had been a crucial supporter for UPLD leader Oscar Temaru in his overseas diplomacy.

Working as a member of the Socialist party group in the French Senate, Tuheiava had campaigned over controversial issues such as: the return of Moruroa and Fangataufa atolls to French Polynesian control; the strengthening of the Morin law (legislation to provide compensation for nuclear survivors in French Polynesia); and the rehabilitation of Pouvanaa a Oopa (the post-war Tahitian nationalist known as the Metua, who was framed, imprisoned and exiled in the 1960s, opening the way for the establishment of the Pacific nuclear testing centre).

Despite Tuheiava’s departure, the UPLD has extended the international debate over French Polynesia’s political status.

Flosse’s political victory in the May 2013 elections was overshadowed by a decision that month by the United Nations General Assembly (UNGA). UNGA resolution 67/265, initiated by three Pacific governments, agreed to re-inscribe French Polynesia on the UN list of non-self-governing territories.

This was a striking victory in Oscar Temaru’s long campaign to obtain international recognition for the Maohi people’s right to self-determination. Its importance is highlighted by the furious reaction of French diplomats to the UNGA’s consensus decision – a sharp contrast to the French government’s engagement with UN monitoring of New Caledonia’s decolonisation process. Since the 2013 resolution, France had not responded to the UN request to submit information on French Polynesia to the UN Special Committee on Decolonisation, as required under Article 73 (e) of the United Nations Charter.

For the first time in December 2013, the UNGA passed a resolution on decolonisation in French Polynesia.

With the Moruroa a Tatou association continuing its campaign for the thousands of Maohi (Polynesian) workers who staffed the nuclear test sites at Moruroa and Fangataufa atolls, the United Nations has begun to investigate the health and environmental impacts of 193 French nuclear tests between 1966 and 1996. An initial UN report in July 2014 simply collated comments by UN agencies, but Temaru and the UPLD continue to lobby for a more extensive scientific report.

Future UN engagement with French Polynesia will also be influenced by the international debate over New Caledonia’s political status, following a Pacific Islands Forum mission to Noumea in 2013 and a UN special mission in March 2014. With both French Polynesia and New Caledonia seeking to upgrade their associate membership of the Forum to full membership, their political status will continue to be debated at regional as well as international level in the next few years.

In spite of this attention, however, these international organisations do not have extensive powers to influence the situation on the ground. French domestic politics and the local economic crisis will have more impact on the popular response to the government in Papeete.

Today, French Polynesia’s economy is in trouble, with declining revenues from key economic sectors and a reliance on French grants and loans (amounting to 175 billion CFP or €1.46 billion a year). Data from recent censuses shows that unemployment increased to 21.8 per cent of the population by 2012, compared to 11.7 per cent in 2007.Overall employment in the key tourism sector is declining after a number of major hotels have closed in recent years.

Over the last year, the Flosse government had been proposing new tourism projects and increased foreign investment as a way out of Tahiti’s economic austerity. The government’s “50 point recovery plan” highlighted infrastructure, employment and overseas investment (especially from China, following a December 2013 mission to Beijing and other Chinese cities).

However Flosse’s grandiose vision of a $3 billion casino and hotel development at Mahana beach in Tahiti highlights the distorted economy that successive governments have promoted. Many public and private infrastructure projects in Tahiti rely on subsidies from Paris and lack real benefits for local Tahitian workers (to attract foreign investors, the government has proposed that workers on the Mahana beach project could receive wages at 20 percent less than the legislated minimum level!).

With an ageing population, limited private sector employment and large numbers of French and local public servants, French Polynesia’s social security fund, the Régime de Solidarité de la Polynésie française (RSPF), is in deficit. President Fritch has been lobbying France’s overseas Minister George Pau Langevin for extra funds for the RSPF, as well as education funding and funding for the rehabilitation of the nuclear test sites.

French President François Hollande will visit New Caledonia at the time of his attendance at the November 2014 G20 meeting in Brisbane, as New Caledonia’s moves towards a referendum on self-determination before the end of 2018.

In Tahiti, Gaston Flosse is down but not out, but the people of French Polynesia may soon be forced to debate what a post-Flosse society might look like. President Hollande has promised to visit Tahiti some time in 2015, so options for political and economic development in French Polynesia will continue to be debated over the next year.

Post Tagged: french polynesia, peace and security, politics
This article was written by

Nic Maclellan works as a journalist and researcher in the Pacific islands and is a correspondent for Islands Business magazine.