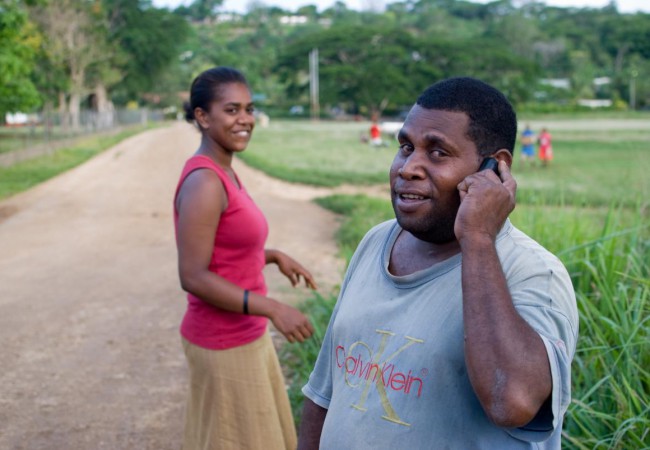 This research presents findings from a three part series of studies on telecommunications use, benefits, and constraints in Vanuatu.

This series of studies undertaken by the Pacific Institute of Public Policy in 2008, 2009, and 2011 has helped illuminate the economic and social impacts of telecommunications market liberalisation. For those living in Vanuatu, many of these impacts are clear: prior to 2008, people in Vanuatu had limited access to phones, but now mobiles are a common household item. Since 2008, both the incumbent, Telecom Vanuatu Ltd (TVL) and the new provider, Digicel, have expanded services across the country, including to remote islands in the north and south. Modes of communication are changing, new business ventures are emerging, and mobile phones are becoming a part of everyday life. The Pacific Institute of Public Policy has been mapping these changes.

The 2011 study adds to findings from the 2008 and 2009 reports, not only by exploring the ongoing impacts of increasing telephone access, but also by investigating the constraints imposed by complementary infrastructure, and patterns of internet uptake. The study was extensive, including over 1,000 face-to-face household surveys, and nearly 100 in-depth focus groups and semi-structured interviews with community representatives and small businesses. Data was collected in 13 rural and three urban research sites across eight islands of Vanuatu over a three month (March and June 2011) period. The following is a summary of our key findings.

Phones are prevalent throughout Vanuatu…

Perhaps one of the most prominent and persistent themes emerging from the study results is that phones—in particular, mobile phones—have become a primary mode of communication across the country. The overwhelming majority of households had access to a mobile phone; four out of five survey respondents reported personally owning a mobile phone; and at the household level mobile phones appeared to be the most commonly owned electrical appliance. From 2008 to 2011, increasing numbers of households in both rural and urban areas obtained access to multiple (three or more) mobile phones.

…but in rural areas, their use is more limited

Despite these clear countrywide patterns, there were some interesting differences between urban and rural areas. For instance, although mobile phone penetration in rural areas is high, rural respondents reported using their phones less frequently than urban respondents. This may reflect limited service coverage, and perceived cost: more focus groups in rural areas expressed concern about the difficulty of obtaining a reliable service signal, and discussed the expense of using mobile phones. Although a number of respondents reported using both Digicel and TVL services in an attempt to maximise cost savings and coverage reliability, in several areas consumers still only have one choice of provider.

…which may be partly attributable to poor transportation and electricity services

In addition to coverage concerns, the usefulness of phones may also be limited by deficiencies in parallel infrastructure. Results from both the household survey and focus groups indicated that poor wharf services were a major inconvenience and source of inefficiency, limiting the potential gains made through improved communication by phone. In addition, few rural areas had grid-supplied electricity, and thus had to rely on solar cells, batteries, and diesel generators, which can be costly to set up and operate. In such areas, fewer residents were able to charge their mobile phone batteries at home, and ownership of other electrical appliances such as televisions and computers was very limited.

The benefits of phone use are still widely felt…

Nevertheless, as with previous years, respondents in 2011 reported a wide range of perceived benefits of increased access to mobile phones, including multiple commercial and financial benefits, connecting with social networks, and accessing key services and information. The greatest positive impacts from phones appeared to be in enabling more frequent contact with family and friends and increasing the speed of communication. Access to health care services and to increased social support was also seen to have improved somewhat as a result of increased access to phones, and, since 2008, increasing numbers of respondents have noted benefits in gaining access to specialised services. In contrast, more than a quarter of respondents felt that phones had not helped them at all in terms of improving communication with government departments.

…and are likely still to be fully realised in rural areas

Again, though, there were some interesting urban-rural differences in the results. Phones appear to have become more integrated in urban communities: nearly three quarters of urban respondents said they could not continue their current economic activities, or could only continue with difficulty, if they could no longer use mobile phones. In contrast, fewer rural respondents were currently so reliant on their phones, in several cases reporting that the loss of phone contact would make no difference to them. However, focus groups revealed that rural respondents were more likely than urban respondents to focus on improving telephone services as a community priority. This suggests that because mobile phone use is more recent and still constrained in rural areas, its benefits have yet to be fully realised (but people see its potential).

Some other forms of communication are diminishing in importance…

The rise of mobile phones appears to have been accompanied by the decline of other modes of communication. Use of fixed line phones was low across the country, and the availability of public phones in rural areas appears to have been declining, likely due to the costs of maintenance and the inconvenience of travel for rural communities. Looking back across the 2008, 2009 and 2011 studies, the use of letters and communication via local leaders has been steadily decreasing, as has the perceived importance of other such traditional communication forms.

…but direct face-to-face contact is still valued, and some social concerns about phones persist

Nevertheless, phones have not been a direct substitute for face-to-face interaction, which remained a preferred channel for many communication purposes. Furthermore, respondents expressed several concerns about the negative impacts of mobile phone use, particularly related to a breakdown in social relations and divergence from traditional behavioural norms. This suggests that face-to-face communication will remain important within communities, and that the greatest benefits of phones arise when they are used in constructive ways to improve connectivity with distant correspondents, rather than to break down close social connections.
Another concern that some respondents raised is that phones are costly. However, there was no evidence that people were substituting expenditure on essential items for expenditure on phones, and most respondents limited the amount they spent on phones to no more than 1,000vt per month—approximately 2% of the mean monthly income across respondents.

Internet use is still limited

In stark contrast to the data on phones, the majority of survey respondents did not have internet access—reflecting the absence of services in most areas. Those who did tended to use internet cafés or access the internet at their workplaces, and to a lesser extent through mobile phones and on home computers. Respondents perceived the internet to be important, especially for news and information, but did not view it as essential. Perceived cost, limited network access, and lack of experience with the technology appeared to be key barriers to increased usage.

Overall, these results suggest that mobile phone use is widespread throughout Vanuatu. Although people are enjoying greater connectivity, there are still some constraints on achieving further economic and social benefits.

This research was carried out in association with the Government of Vanuatu, Ministry of Infrastructure and Public Utilities with funding from the Australian Agency for International Development through its Vanuatu Governance for Growth Programme.