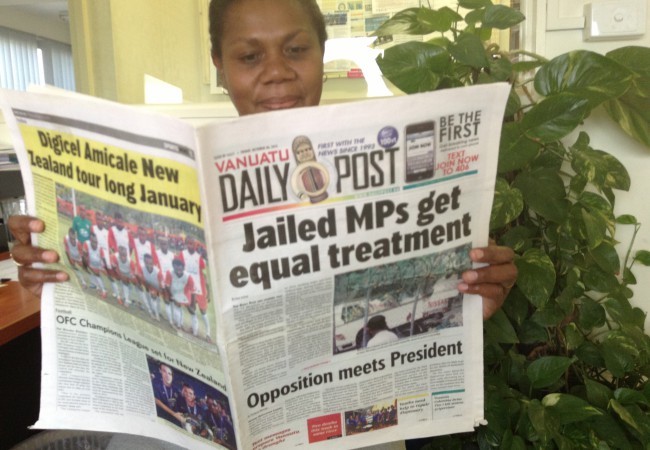 The Pacific Islands Forum Secretariat last week issued its final assessment of its 14 member nations’ progress in meeting the seven Millennium Development Goals (MDGs), whose 15-year lifespan has now ended in favor of a new set of global targets known as the Sustainable Development Goals (SDGs). Overall, the Pacific’s result was dismal. The Forum’s assessment shows that only four of 14 independent nations met five or more of the seven MDGs, while three achieved not a single one—a poor national report card despite large amounts of donor aid to the region, including Asian Development Bank grants and loans that more than doubled to US$2 billion in the 2005-14 period.

Announcing release of the final MDG progress report last week, Forum Secretary General Dame Meg Taylor praised Pacific governments for their ‘substantial progress’ in meeting the development goals, and offered a modest excuse for the lack of performance measured in many areas, particularly in poverty reduction, gender equality, and environment improvements: ‘The MDGs were global goals and applying them at the national level was difficult. In addition many of the MDG indicators did not suit the national context.’

I suggest a different way of evaluating lack of progress on MDGs. Juxtapose the Forum’s MDG assessment with the following headlines: ‘Another PNG MP to stand trial for fraud,’ ‘14 Vanuatu MPs heading to jail,’ ‘Eight sacked over government fraud in Solomon Islands,’ ‘Widespread fraud suspected in Marshall Islands government departments,’ ‘Green light for former Cooks minister to be tried,’ and so on.

It starts from the top and rolls down the line of government workers who view ‘government money’ or aid funding as a pot of money to put in their own pockets. Unfortunately, anti-corruption institutions and enforcement systems are weak in most islands such that there are more government leaders and workers focused on manipulating government finance systems for their own benefit than there are people and resources attempting to enforce accountability and rule of law.

Speaking last week about the Marshall Islands’ membership in the United Nations Convention Against Corruption, Auditor General Junior Patrick confirmed this concern about the reliability of enforcement systems. He said the initial UN review of government systems shows there is a framework in place for preventing corruption. But, he added, he would like to see the UN anti-corruption review go a step further “to see if implementation is effective, what is the time frame for investigations and prosecutions, and what resources are available (for accountability efforts). We have a framework, but is it functional?” For small island countries in particular, where enforcement capability is modest, this is the $100 question.

until corruption is minimized and rule of law is emphasized, getting traction on the new SDGs is going to be a challenge

These same political leaders and personnel in government ministries and agencies—mentioned in the headlines above—were supposedly responsible for delivering performance on the Millennium Development Goals, development plans, and a host of other government services. But when large numbers of government officials are focused on personal instead of national interests, it is obvious their nations are not going to be effectively implementing poverty reduction schemes or gender equality goals.

In an earlier blog in this space, I commented: ‘Corruption comes in many forms: coming late and leaving early but getting fulltime pay, not carrying out the mission of a government office, manipulating tenders and funds for personal interest, and seeing some or all of the above and doing nothing about it.’

From the many corruption investigations, some of which have led to high-profile prosecutions in the region, we now know that leaders in many countries are running government as if it is their personal business. So when people talk about island leaders and saying things such as, ‘Strong political leadership and commitment’ is what is needed to make progress, are we simply kidding ourselves? Political leadership and commitment for what agenda? We simply cannot continue to ignore the fact that widespread corruption is undermining rule of law and slowing progress to a crawl in many countries. The imprisonment of 14 Vanuatu MPs is a landmark anti-corruption development for the Pacific. But over recent past years, penalties in the region for corrupt actions by politicians have been modest to non-existent in many islands, reinforcing a prevailing message, at least at high levels of government, that crime does, indeed, pay.

So eight of the 14 Forum members managed to implement only two or fewer MDGs. In September, all the countries in our region signed onto the 17 Sustainable Development Goals (SDGs), promising to implement these over the next 15 years. We could not manage seven MDGs and now we’ve got 17 SDGs, with 169 targets—who exactly is going to make these 17 SDGs a reality in our islands? This is not to say that public health professionals, doctors, educators, community development specialists, and staff at the Forum Secretariat are not committed to making improvements in their respective islands. The point is that for them to be successful, they have to have the attention and support of political leaders. Yet many of these leaders appear to be more focused on self-interested business deals or embezzling aid funding than they are on implementing national development priorities.

Only two nations—Cook Islands and Niue—met all seven MDG targets, while Palau accomplished six. These nations should be recognized for this laudatory performance and probably the most helpful development for the rest of the Pacific islands would be for this trio to convene a working group to identify and share the ingredients that allowed for their success so that other countries in the region can see if there is anything in the Cook Islands/Niue/Palau models that would work elsewhere. Still, until corruption is minimized and rule of law is emphasized, getting traction on the new SDGs is going to be a challenge in many islands.

Caption: The Vanuatu bribery case has made headlines across the region (pictured here). The Vanuatu Appeal Court will deliver its ruling next Friday on appeals by 14 MPs jailed on bribery convictions.