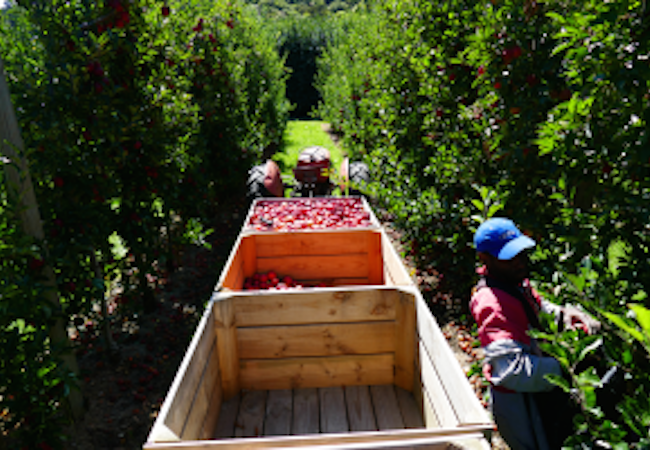 Twenty five year old Sione Vailahi of Tonga was unemployed but he had obligations to take care of his young family, and also his aging mother.

He had just returned home after several years of volunteer missionary work overseas. He was looking for a job but could not find anything suitable.

Sione heard of an employment scheme that gives opportunities for locals to apply through Government for temporary jobs overseas. The available jobs involved working in horticulture and viticulture in either New Zealand or Australia.

The amount of money he would earn in a seven month time period would be equivalent to working at a minimum wage job in Tonga for a period of two years or more. Sione applied and was accepted as part of a group of temporary workers from his village.

This is a scheme whereby if employers cannot find New Zealand citizens or residents to plant, maintain, harvest and pack crops in the horticulture and viticulture industries, they can apply to be a Recognized Seasonal Employer (RSE).

Once you have RSE status, you can apply for an Agreement to Recruit (ATR), which allows you to recruit non-New Zealand citizens or resident workers.

The horticulture and viticulture industries are important to New Zealand but they often suffer from a shortage of local workers. The Recognized Seasonal Employer (RSE) work policy facilitates the temporary entry of additional workers from overseas up to seven months, to meet these labor shortages in order to remain competitive with the rest of the world.

Pacific nations that have agreed to be part of this scheme include Fiji, Papua New Guinea, Federated States of Micronesia (FSM), Kiribati, Samoa, Tonga, Tuvalu, Palau, Solomon Islands, Vanuatu, and the Marshall Islands.

The RSE scheme allows groups of workers organized from the Pacific islands to work in New Zealand orchards and vineyards, during the busiest periods of harvesting and pruning, when local labor is often in short supply.

As New Zealand Minister of Foreign Affairs, Hon. Winston Peters said in a speech at the approval of the RSE program in October 2006:

“First and foremost it will help alleviate poverty directly by providing jobs for rural and outer island workers who often lack income-generating work. The earnings they send home will support families, help pay for education and health, and sometimes provide capital for those wanting to start a small business.”

Pacific island countries have welcomed the scheme as a means of giving their people temporary employment overseas where their earnings could be substantially higher than in the home country.

The Australian equivalent of the RSE program is called SWP – Seasonal Worker Program. It permits 8 Pacific island countries and Timor Leste to participate, from 14 weeks to 6 months.

Those from the islands who want to participate in the RSE scheme must get a job offer from an RSE in order for New Zealand immigration to process a visa application.

There is a cap on the number allowed in to New Zealand each year, which now stands at 9,000.

If the cap was lifted and employers were allowed to hire as they need, there is likely to be more than 12,000 workers each season.

The majority of workers, around 2,400, are from Vanuatu. They piloted the scheme for a year before everyone else was invited to participate.

Tonga is the second at around 1,600 participants, and Samoa is third. The rest of the island countries have much smaller numbers involved in the scheme. Last season, there were 8,500 in total under the scheme.

There were 3,590 workers hired from Vanuatu in the first two seasons, and 1,971 from Tonga.

Unemployment and the availability of labor supply

One of the ongoing benefits to those who have participated in the RSE scheme is that they could easily be recruited again for re-employment.

In terms of Tonga, between 2007 and 2012 (6 years), the average annual income for Tongan workers hired in the scheme before tax and costs was $NZ14 million (Source: NZ Inland Revenue).

The estimated earning after tax and costs was around 52-55 percent. That means that about NZ$8 million per annum is either remitted from New Zealand or carried home in one form or another.

When tabulated over a period of 8 years, 11,200 workers have earned over NZ$64 million and up to 55% of that was remitted home to Tonga. That is close to $55 million Pa’anga over 8 years remitted.

If you add Australia’s SWP earnings to it, there is at least $10 million Pa’anga remitted to Tonga each year (2011), after tax and costs. This amount is growing and by 2015, it is estimated to double due to greater participation of seasonal workers.

The sum for Samoan workers is similar, but latest results of studies on remittances carried out by Massey/Waikato University will be released later this year.

The introduction of the RSE scheme made up significantly for the drop in remittances in both Tonga and Samoa during the global financial crisis of the years 2008/2009.

I will look at the global calls for the increasing labor mobility in my next blog.

Caption: Although the RSE schemes have been focused on providing agricultural labour, in future many other industries will open mobile labour from the Pacific. Credit: OCTA

Post Tagged: economics, labor
This article was written by