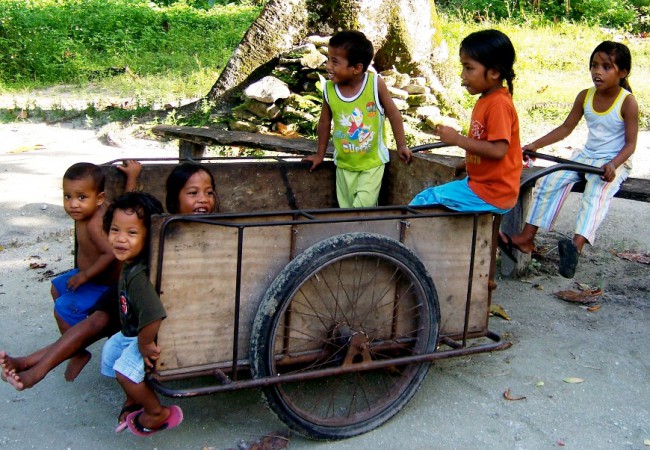 Bad news travels just as quickly in small islands as it does in metropolitan centers. But it appears that bad news—“a problem”—is often more difficult to get a handle on in the islands, since addressing a problem means it first has to be acknowledged, and acknowledgement is usually about as welcome as a failing grade in school. For one thing, getting along in a small island, at least superficially, is a priority. So keeping disputes or problems muted and in the background is generally preferred, while at the political level this island custom is often used to avoid dealing with issues.

The overlay of western-style democracies on centuries old customary practices—that emphasize consensus and harmony, while frowning on openly voiced criticism and complaint—is an ongoing source of tension in many Pacific islands in this modern era. While customary practices of non-confrontation and indirectness may serve the interests of wily political leaders, today’s leaders are confronted with two norms now prevalent in the region: Local populations are, after more than 30 years of political independence, accustomed to democratic practices that include the free exercise of individual rights; and the digital age, in fact the remarkable leaps in connectivity over just the past five years, has generated a level of public information availability and scrutiny of government performance that is unprecedented.

In today’s world, there are global reports on sustainable development, doing business, trafficking in persons, freedom of the press and religion, climate action, money laundering and tax havens, government bankruptcy and debt, and more. They are all now easily accessible to anyone with an Internet connection. No longer can governments control the message, much as some may try. Perhaps more to the point, island governments that not only desire but actively seek benefits from engagement in the world community can, of course, cherry pick the advantages while ignoring the requirements of compliance to gain these benefits—but doing so means the country can suffer reputational risks or, in worst case scenarios, sanctions from other governments and aid agencies.

A couple of cases in point:

Even the smallest of our islands need systems in place to promote democracy and accountability, and to reasonably ensure that illegal activities are not happening.

The governance picture is certainly not all bad news in the region. A number of island governments are improving their international reputations by adhering to global governance standards. Papua New Guinea, for example, was the only Pacific nation on “Tier 3” human trafficking status last year, and improved to “Tier 2 Watch List” this year. The Federated States of Micronesia, similarly, was on the “Watch List” last year, and improved its standing to “Tier 2” in 2015.

For the most part, these global rankings evaluate what systems governments have in place to foster what can be described as good governance or best practices. We may not think we have human trafficking or money laundering happening in our countries, but if we have no process for investigating and asking the questions, who can say for sure? No government in the region condones illegal practices, such as human trafficking, but obviously simply being against something is not an adequate response in today’s world where trafficking, terrorist financing and worse are global problems with local ramifications.

The island norm of not asking questions and refraining from open confrontation—generally a necessity for functional democracies—may be most extreme in atoll nations, where getting-along at all costs is simply a requirement of life. Still, even the smallest of our islands need systems in place to promote democracy and accountability, and to reasonably ensure that illegal activities ranging from money laundering to trafficking are not happening. And if they are discovered, there is a mechanism in place for action.

Prior to the Internet age reaching the Pacific and the ramp up in global awareness of best practice systems, most of the Pacific islands were literally on the outer fringes of world consciousness. Not many knew what was happening in our islands, and even fewer cared. Not so anymore. And as countries in our region sign up to international conventions and treaties, take sides at the United Nations on key issues of the day, demand action on climate, fishery and other challenges from developed nations, and seek donor aid for development, there is a price to pay, not so much in dollars and cents, but in government responsibility to meet global good governance standards and in the public obligation to hold our governments accountable for delivering the benefits of this international engagement to people in the community.

Photo: Ebon Atoll in the Marshall Islands, by Megan Coe.