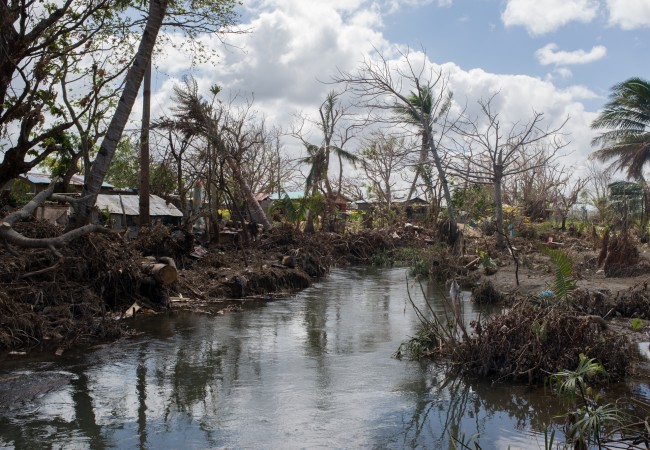 Tanna was one of the hardest hit islands in Vanuatu when cyclone Pam devastated Vanuatu in March 2015. The damage wrought by Pam left many people with no proper shelter, destroyed food gardens and caused the loss of many livelihoods. The forestry and fishery sectors—both critical for employment and food security on the island—were also affected. Canoes and boats, engines and fishing gear were ravaged, and coastal marine habitats were also severely damaged.

But there appears to be proper support in the pipeline in the form of long-term approaches, aimed at recovering and building more resilient forestry and fishery sectors. This article proposes some recommendations that could revive these two sectors.

A series of assessments by the Department of Agriculture and Rural Development (DARD) indicate that natural forests and small-scale plantings in agro-forestry systems were all affected. Based on the Vanuatu Resource Information System (VANRIS), the total commercial volume of timber that was damaged is estimated at some 50,000 cubic meters. These commercial volumes are from high value indigenous tropical hardwood tree species.

We need to support communities with a total of 10 medium-scale saw mills that will operate to extract timber from the logs which will be used to rebuild homes, with the excess to be supplied to the local markets to create employment and income-generation activities for the local population. DARD has offered to provide trainings to assist in facilitating markets for timber.

DARD has supported tree planting for some time. Most farm trees on the island have been planted on recommendation of the DARD. One of them is the Vanuatu Sandalwood. It is a high value tree species and has been earning a profitable income for growers. Other indigenous multipurpose tree species that have been planted include the Terminalia, the Copal gum, and the Basswood Whitewood.

But, as most of the trees were planted only recently by most farmers and were only moderately wind firm, assessments ndicate that some 80% of the trees were badly damaged, and need to be replanted. The recommendation is to establish a total of 20 nurseries with the capacity of producing a total of 50,000 seedlings annually. The 20 nurseries have been targeted to produce an estimated total of 1,000,000 million seedlings for the next three years.

There appears to be proper support in the pipeline.

A total of 20 demonstration plots of Agro-forestry will be established at each nursery site for farmers and annual field days for farmers to inspect the plantings. The agriculture sector on Tanna Island is blessed with a rich volcanic soil and the sector is slowly progressing and recovering.

There has been some support in the distribution of planting materials on the island, however the potential also remains to access other traditionally selected cultivars of root crops from northern Vanuatu (which wasn’t so affected by Pam) to hasten the replanting process.

Potato planting has also generated interest from Tanna farmers in the wake of cyclone Pam. This is an indication of good progress in ownership and the determination by local farmers and communities. The recommendation is to utilise the 20 Forestry Nursery location and with the support from DARD to deploy planting materials of the selected cultivars to supply to farmers and duplicate and deploy to farmers.

A long-time serving root crop specialist, Dr Vincent Lebot, has stated that ‘Vanuatu has no food security,’ pointing out that traditional societies in the past employed clever agro-forestry farming systems, and when this was lost, Vanuatu lost its resilience to natural disasters. In Tanna, food security is a challenge, particularly in terms of access to protein. While there is available livestock, the majority of people on the island can’t afford enough protein and beef. Protein sources need to be heavily invested on to provide for the population.

A study by the Food Agriculture Organisation (FAO) on fisheries found that Vanuatu is rated as one of the lowest in the region in terms of accessing and consuming fish. A recent development in the fisheries sector is the promotion of fishpond farming of an introduced exotic species called Talapia. The only challenge with this farming technique is the availability of water, but the good news is the species does not need running water as it can easily survive in water with limited oxygen. Most farmers involved in fishpond farming for the Talapia species have been encouraged to use rainwater, as it is best for the species.

The recommendation here is to establish 10 central breeding centres for fishpond farming and to deploy some 100 fish farms so that interested farmers wanting to access the fish stock can purchase from here. The department of fisheries has conducted similar work in the northern region, which proved to be highly successful. Fishpond farming has only recently commenced on Tanna, but we hope to see the same results. Demand for protein and fish alone on Tanna is huge, so developing fishponds into a dependable sector and promoting the development of sustainable forestry will help develop local production capacity to meet post cyclone demands and ensure long-term sustainability.

Lai Sakita is the head of the Vanuatu Environment Advocacy Network (VAEN) which is a consortium of local civil society organizations.