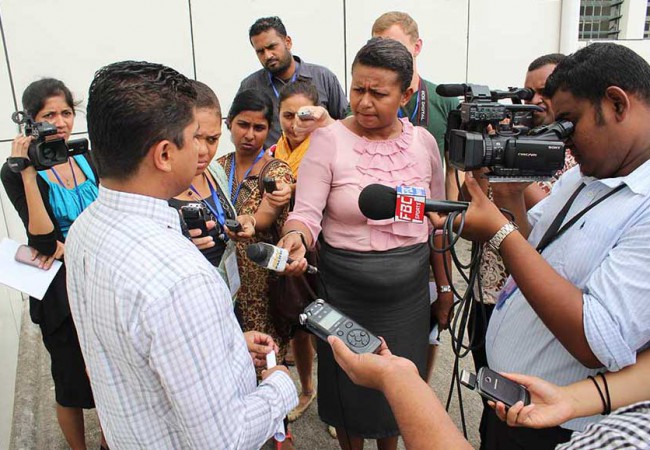 Almost eight months after the much-heralded election to usher Fiji back into democracy mode, the country will mark World Press Freedom Day today facing serious questions about its claims to have a free and fair media.

The harsh 2010 Media Industry Development Decree is still a spectre. Although Fiji has produced marked improvements over the past year, recognised by global freedom organisations, many challenges lie ahead.

The Multinational Observer Group’s final report on the September 17 election found the poll “credible” – as foreshadowed by its preliminary report in spite of critics’ cries of “fraud”. However, last month’s report also offers a raft of recommendations for improvement, including the news media.

Among these recommendations is a call for an independent watchdog for the Fiji Media Industry Development Authority (MIDA). The authority was spawned by the 2010 decree and played a mixed role during the general election.

Five months after the vote, Fiji was ranked 107th out of 179 countries listed in the 2014 World Press Freedom Index. The index is drawn up by the Paris-based Reporters Without Borders.

Fiji rose 10 places from the previous ranking in 2013. Major reasons for this improvement were the adoption of a new constitution on September 6 2013, widely criticised as it had been over many months, and the “free and fair” elections promised by the end of September 2014.

News media and civil society groups hoped that the election would open the door to a free media climate, which had been lacking since Commodore Voreqe Bainimarama’s military coup in December 2006.

Expanding the bounds of public debate

Public debate has improved markedly over the past few months. News media have been relatively more robust in terms of published political comment and debate, particularly in news columns and in letters to the editor.

But civilian Prime Minister Bainimarama, who retired as rear-admiral last year, retains an autocratic streak. This was on show in a recent tirade against The Fiji Times for “irresponsible journalism” over the reporting of race-based education comments by Opposition Leader Ro Teimumu Kepa.

A major problem previously has been a “divided media” and a professional leadership void left by the now-defunct Fiji Media Council. The council had been accused of “failing to handle ethical lapses and controversies satisfactorily or fast enough”.

The harsh 2010 Media Industry Development Decree is still a spectre.

Ricardo Morris, editor of Repúblika and president of the revived Fijian Media Association, spoke at the recent 20th anniversary conference of Pacific Journalism Review in Auckland about problems facing the media after the election. According to Morris:

It can be argued that such division was one reason it was easy for the military government to bring into force the Media Industry Development Decree in 2010. The government justified its actions with reference to some of the unscrupulous journalist practices that should rightly be condemned.

Morris also pointed out that the Fiji Media Council’s legacy continued in the form of a code of ethics for media workers embedded in the decree.

We realised a bit too late that we were all in this together despite our personal political views or those of the companies that we worked for. United we stand, divided we fall.

In a joint submission to the United Nations Human Rights Council’s second universal periodic review, the Auckland-based Pacific Media Centre (PMC) and Paris-based Reporters Without Borders (RSF) argued that the constitution, described by the Fiji government as “coup proof”, still restricted freedom of the press in four particular areas.

The first criticism was that too much executive power had been placed with the offices of the prime minister and the attorney-general. They controlled nearly all appointments to the judiciary and independent commissions.

Secondly, the chief justice and president of the Court of Appeal would effectively be political appointments. This created a risk of abuse of power.

Thirdly, the Bill of Rights is weakened by “severe limitations on many rights”. In what is known as the “claw-back clause”, governments would simply need to show that a limitation is “reasonable”.

Previously, the state had clamped down on independent journalists, bloggers and netizens. This so-called claw-back clause makes them vulnerable to selective government pressure in the future.

Fourthly, the constitution provides few avenues for citizens to participate and ensure “good and transparent government”.

Signs of self-censorship but also hope

While online commentaries and letters to the editor have featured more vibrant debate in recent months – both in the lead-up to the election and since – a climate of self-censorship continues.

The recent tragic killing of a leading Fiji journalist and gender issues advocate, Losana McGowan, allegedly by her partner, was greeted by surprisingly muted media responses about Pacific-wide domestic violence. Some commentators saw this as reflecting self-censorship. However, some statements on this issue surfaced this week and Bainimarama himself gave a strong speech on the topic when opening the Pacific Women Parliamentary Partnership Forum on Wednesday.

But there are hopeful signs on the horizon. These include the recent buy-out of the regional Islands Business news magazine by a group of feisty local journalists, including former Fiji Times editor-in-chief Netani Rika and current editor Samisoni Pareti.

This should strengthen what is arguably the most influential Pacific publication based in Fiji.

This article was previously published by the Pacific Media Centre on May 3, 2015.

Post Tagged: fiji, media
This article was written by