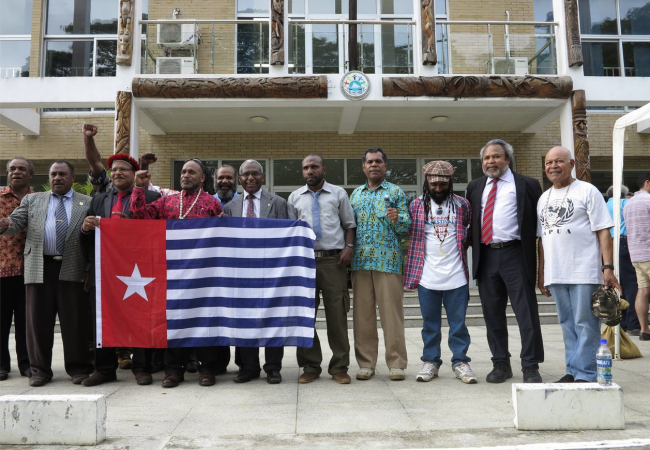 West Papua’s new application for membership of the Melanesian Spearhead Group (MSG) has been given a boost by unexpectedly strong comments from PNG Prime Minister Peter O’Neill.

In a speech during a summit of national leaders, Mr O’Neill said it was time to speak about the oppression of ‘our brothers and sisters in West Papua’.

‘Sometimes, we forget our own families, our own brothers, especially those in West Papua. I think as a country, the time has come to speak for our people about the oppression there. Pictures of brutality of our people appear daily on the social media and yet, we take no notice. We have the moral obligation to speak for those who are not allowed to talk. We must be the eyes for those who are blindfolded.’

‘Again, Papua New Guinea as a regional leader, we must take the lead in having mature discussions, with our friends and more so, in an engaging manner.’

PM O’Neill’s comments follow the application by the newly unified West Papuan movement, the United Liberation Movement of West Papua (ULMWP), which on Wednesday resubmitted its application for membership to the MSG. The afternoon ceremony at the MSG Secretariat in Port Vila made it clear that this was not to be a quiet handing over of prepared documents to the reception desk. The Secretariat laid on a red carpet welcome for the gathered West Papuan leaders with full kastom and encouraging words by Secretariat staff. Leaders on all sides were visibly moved by event, following emotional speeches by the ULMWP Secretary General Octo Mote and Benny Wenda who said “we have struggled for more than 50 years to get to this day”.

As part of the ceremony, ULMWP leader Octo Mote did not hand the application directly to MSG Director General Peter Forau, but to Vanuatu’s deputy Prime Minister Ham Lini, in recognition of Vanuatu’s strong support in their struggle. Mr Lini then formally handed the documents to Mr Forau on behalf of the ULMWP and Vanuatu government.

Melanesian kastom was on full display; gifts of woven mats and string bags were exchanged, pigs were killed and a feast prepared, traditional dancers and tam tam drums rang out and prayers were offered up for the West Papuan cause.

Now it is up to the leaders of PNG, Vanuatu, Fiji, Solomon Islands and the FLNKS of New Caledonia to decide on bringing the West Papuans into the Melanesian family. It has been a divisive issue for many years and Indonesia has done all it can to split regional solidarity by offering all kinds of inducements to national leaders. At varying times, PNG, Fiji and Solomon Islands have all succumbed to Indonesian ‘sugar’, while Vanuatu and the Kanaks of New Caledonia have remained solidly behind the Papuans.

Few underestimate Indonesia’s ability to work behind the scenes to frustrate regional solidarity on this issue, and much will depend on PNG and Fiji’s leaders agreement.

West Papua’s membership will be decided at a meeting of regional leaders in the Solomon Islands to be held in June, however, whispers from the MSG Secretariat suggest that the issue may be decided even earlier with talk of an imminent meeting of leaders on this issue alone.

Few underestimate Indonesia’s ability to work behind the scenes to frustrate regional solidarity on this issue, and much will depend on PNG and Fiji’s leaders agreement. Indonesia dangles the carrot of ASEAN membership to PNG, while Fiji has found it useful to forge closer ties with Jakarta during its stoush with Australia and New Zealand. Yet even these two seem to be finding it harder to justify supporting Indonesia when it is doing so little to change its brutal policies in West Papua. The killings continue and newly elected President Jokowi has offered little more than rhetoric in his bid to woo the West Papuans after decades of neglect and oppression. Foreign media remain banned despite pledges from Jokowi to change this during his election campaign.

PNG’s strong statement on human rights in West Papua does not directly endorse the ULMWP application, but it does send a signal that Indonesia cannot continue with business as usual. Cynics might link Prime Minister O’Neill’s comments to the fact that his 30 month grace-period as PM is over now and he needs the support of as many MPs as he can get to avoid any looming motions of no-confidence. Many of PNG’s MPs are pro-West Papuan, including Port Moresby Governor Powes Parkop, so the West Papuan issue is beginning to have domestic ramifications in PNG. There may also be an element of PNG trying to claw back some regional leadership given Vanuatu’s bold leadership on this issue and Fiji’s growing diplomatic clout in the international arena, having recently hosted both the Indian and Chinese presidents. There has been some on-going competitiveness and even hostility between PNG and Fiji over the past year on a variety of issues.

Pressure is on Fiji’s Prime Minister Bainimarama now to show whether he values Melanesian solidarity and decolonisation above a pragmatic relationship with Indonesia, which has put him at odds within the region.

ULMWP Sec Gen Mote believes that “the Melanesian family of nations is not complete without West Papua”, something endorsed by Vanuatu’s deputy PM Lini on the day. During the handover ceremony, Mr Lini quoted his brother, Vanuatu’s founding father, Fr. Walter Lini, who said decades ago: ‘Vanuatu is not totally free until other colonized people in the region are politically freed.’

Whether the rest of Melanesia agrees is soon to be tested again.