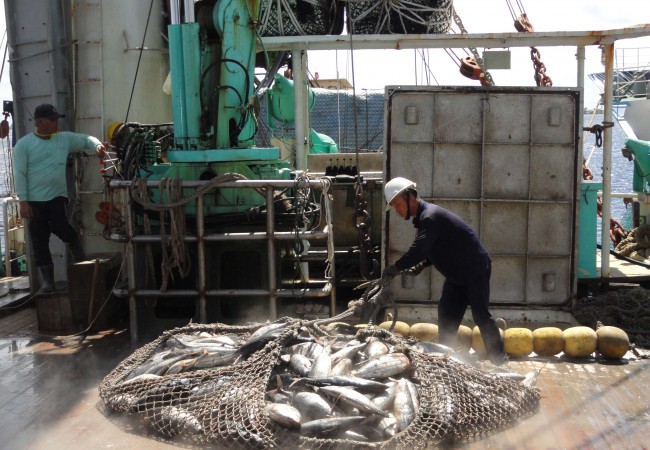 The Western and Central Pacific Fisheries Commission (WCPFC) annual meeting opens in Apia, Samoa next week Monday (1 December) with an agenda that is critically important to the sustainability of the region’s tuna industry—valued at over US$6 billion in 2013. In light of the growing dependence of the economies of many island nations on the tuna industry, finding a way to sustain the resource in a tuna-hungry world goes to the heart of sustainability of island employment, national budgets, tax revenues, and government services.

The Parties to the Nauru Agreement (PNA) group are going to be the leading force pushing for ramped up rules to prevent overfishing of tuna in the region at next week’s meeting. But will they be successful in the face of a fishing industry reluctant to change?

Just as PNA-member Kiribati shocked the United States purse seine fishing industry in early October when it announced it would not provide thousands of fishing days to U.S. vessels as it had in the past, the extent to which the PNA will go to limit and in some cases reduce tuna fishing in the Pacific may surprise distant water fishing nations. What it comes down to is Pacific islands taking control of the tuna resource and forcing the industry, long controlled by distant water nations, to follow the rules laid down by the islands.

Many people in PNA are less than optimistic about the chances of getting the WCPFC to take decisive action next week in light of its inability to do so the past several years. “Looking ahead, PNA members will likely need to reassess their approach to bigeye conservation and management if our measure is not approved at WCPFC 11 in Samoa in light of the burden of bigeye conservation and management being placed on small island developing states through the current conservation and management measure,” said Dr. Transform Aqorau, CEO of the PNA, last week. His point: the PNA have already ratcheted up conservation measures in their 200-mile zones—limiting the use of fish aggregation devices, for example—but the WCPFC has not followed suit for the high seas, where most of the longliners, which target bigeye tuna, are fishing.

Pacific islands and distant water fishing nations have been put on notice by the latest regional stock assessment that catches, particularly for bigeye, a tuna coveted by the Asian, American and European sashimi market, must be capped or reduced. The scientists recommended a reduction in bigeye tuna fishing, no increase in catch levels for yellowfin tuna, and setting limits on fishing for skipjack tuna to maintain stocks at current healthy levels. But none of this is doable if the WCPFC fails to act.

The Parties to the Nauru Agreement have put a detailed plan of action on the table that aims to reel in largely out-of-control longline fishing on the high seas and to reduce the use of “fish aggregation devices” — or FADs — that lead to large catches of juvenile bigeye.

‘The extent to which the PNA will go to limit and in some cases reduce tuna fishing in the Pacific may surprise distant water fishing nations.’

But the Fisheries Commission has failed to take decisive action in the past several annual meetings. PNA and Forum Fisheries Agency islands are becoming increasingly disillusioned with the unwillingness of distant water fishing nations to agree to needed cutbacks in fishing for bigeye, as well as limiting catches of yellowfin and skipjack tuna.

And they are showing this by turning the industry on its head. Last month, despite an historic US$90 million one-year fisheries deal reached in Honolulu, all sides say the Pacific’s long-term treaty with the United States must be redrawn. This fisheries deal sparked much media reporting and comment, especially when Kiribati announced it was going to provide only a fraction of the fishing days the U.S. fleet was seeking. Why is Kiribati not providing days to the U.S. fleet through the treaty? It’s about business.

During the most recent negotiating session between the U.S. and the 17 island nations that benefit from the U.S. treaty, the U.S. was shocked to hear Kiribati say it would offer only 300 days for U.S. vessels to use under the treaty—after providing several thousand days annually in recent years. But the U.S. shouldn’t have been surprised by this latest development. It’s been in the offing since 2010.

While leaders from the Forum island countries have said they want their fisheries officials to extend the treaty with the U.S., PNA nations are less than enthusiastic. Why? Because under the treaty, a price is locked in for U.S. access to fishing days that, in the view of PNA countries, undervalues the days. Many PNA countries don’t like being locked into providing days to the U.S. treaty—which requires 8,000 fishing days per year in PNA waters—because they can usually sell those days to other fleets for more money. While the minimum price of a fishing day in 2014 has been US$6,000, we’ve seen days sell for as high as US$13,000 because of heavy demand. In October, virtually all days for the year were sold and fishing companies were scrambling to buy or trade a few more days to continue fishing until the end of the year—a situation that puts a financial premium on days, to the benefit of the islands. But under the U.S. treaty, a price is locked in for the year: the Forum Fisheries Agency gets a management fee for administering the treaty, 15 percent is split equally among all 17 islands, and a few other deductions reduce what is left to pay the islands where U.S. purse seiners actually catch the fish.

With most of the fishing the past two years focused in Kiribati’s vast EEZ, Kiribati knows it can command a premium price because virtually all fleets want to fish in their waters. According to PNA, Kiribati’s message to the U.S. is not ‘don’t fish in our waters’. Instead, Kiribati wants to sell days bilaterally to the U.S.—outside of the treaty—as it does with other fleets so it can control the price.

Another development that has turned the industry upside down is Papua New Guinea’s National Fisheries Authority’s successful public tender of fishing days conducted last month. Although the minimum price for fishing days in 2015 is US$8,000, through the tender, PNG gained payment as high as $12,000 per day. Through the public tender, PNG restructured the number of days allocated to domestic and distant water fishing nation vessels, and addressed the ongoing problem that offloading tuna for domestic processing has not kept pace with requirements for distant water vessels or concessions provided to domestic vessels.

The tender put distant water fishing nations on notice that compliance with agreements that require vessels to land fish for processing will be enforced, pointing out that despite fishing access agreements requiring fishing boats to land 10 percent of their catches in PNG, “not one fish has ever been landed for processing.”

The actions of both Kiribati and PNG have been made possible by the PNA’s “vessel day scheme” (VDS) that allocates a certain number of fishing days for the year to each member country and establishes a minimum day price.  That price has skyrocketed with tuna revenues accruing to PNA members quadrupling, showing how the VDS has allowed PNA to shape the industry over the past five years.

In Apia, PNA faces its greatest challenge: Gaining agreement of distant water fishing nations to reduce mortality of bigeye tuna by reducing catches of longliners and most importantly, getting the Asian longline industry to provide operational catch data that for 10 years it has refused to give to the WCPFC, despite it being an obligation of membership. PNA is calling for catch levels to be cut further for nations that continue to avoid providing operational catch data—which is essential to estimating the total harvest every year and to producing accurate stock assessments.

Bigeye tuna is on the edge of an abyss, and whether it continues to be a billion dollar global industry will be determined by actions taken by islands and distant water fishing nations to reduce catches of both longliners and purse seiners. If these actions don’t come about next week in Apia, the PNA will be forced to do what it has done in the past: make rules for high seas tuna conservation that are a requirement for fishing in PNA zones.