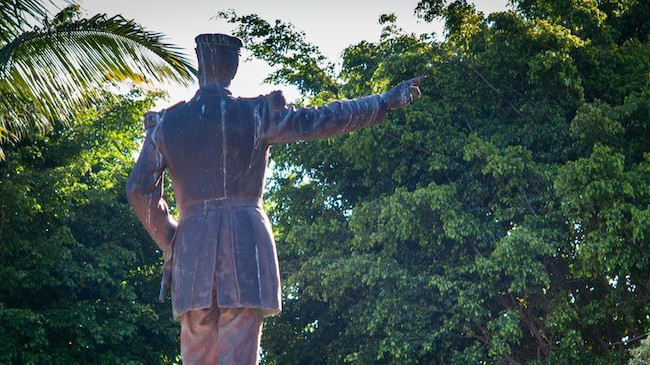 After elections in May 2014, New Caledonia’s Congress and government is divided between supporters and opponents of independence. In the incoming Congress, there are 25 members of independence parties (an increase of two from the last elections in 2009). Three separate conservative parties have 29 members and, in spite of significant policy differences, remain opposed to independence and a final break with the French Republic.

Under the provisions of the 1998 Noumea Accord, the incoming Congress can decide by 3/5 majority to set a date for a referendum on self-determination. If no date can be agreed, the French State must hold a referendum in the second half of 2018. If the vote goes against independence, two further referenda are scheduled in subsequent years.

The Kanak independence coalition Front de Libération Nationale Kanak et Socialiste (FLNKS) has long looked to the Pacific Islands Forum, Melanesian Spearhead Group and Pacific governments for solidarity in its quest for decolonisation. This support is even more important in the next few months, with the French State sending a special mission to promote dialogue between opposing parties and French President Francoise Hollande scheduled to visit New Caledonia in November.

In May 2014, voters in New Caledonia went to the polls to elect members of three provincial assemblies (in the Northern, Southern and Loyalty Islands provinces). A proportion of the 76 elected assembly members make up the 54-member national Congress and the 11-member Government of New Caledonia, currently led by President Cynthia Ligeard.

While the population of the North and Loyalty Islands are mostly indigenous Kanaks who support independence, the Southern Province and the capital Noumea have long been a bastion of conservative anti-independence groups.

Following its founding in the 1970s by the late Jacques Lafleur, the once hegemonic Rassemblement party was the leading conservative force in New Caledonia, especially during the conflict of the 1980s. However divisions amongst anti-independence politicians over the last decade have seen a significant shift of support away from Rassemblement. At the previous elections in 2009, Rassemblement-UMP (RUMP) won the largest number of seats in New Caledonia’s Congress. However a 2013 split between RUMP and the breakaway Mouvement populaire calédonien (MPC) led by Gael Yanno and Sonia Backes has damaged both parties.

The latest victory continues a trend for Gomes, who last served as President of the Government of New Caledonia between 2009-11. In June 2012 elections, Gomes and CE’s Sonia Lagarde won New Caledonia’s two seats in the French National Assembly, defeating incumbent RUMP members. In March 2014, CE also triumphed in a number of municipal elections in the Southern Province, including Noumea where Lagarde become the first woman to serve as Mayor in the national capital.

While it could not gain a majority in the Congress, the independence movement Front de Libération Nationale Kanak et Socialiste (FLNKS) maintained its overwhelming support in the indigenous Kanak population and continued its efforts to win electoral support from members of other ethnic communities. Supporters of independence won all 14 seats in the assembly of the outlying Loyalty Islands and 18 of 22 seats in the Northern Provincial Assembly.

In the Southern province, where indigenous Kanaks are a minority, the four political parties that make up the FLNKS ran a joint “Rainbow” list of candidates with other parties that are not formal members of the independence coalition: Parti Travailliste (PT), Dynamique Unitaire Sud (DUS) and the local branch of the French Socialist Party. The united Rainbow list made a significant advance, increasing pro-independence representation from four to seven seats. However these advances fell short of an overall majority in the national parliament.

In the aftermath of the 2014 elections, the three leading anti-independence parties agreed to carve up key posts in the assemblies, Congress and government under a so-called “governance pact”. RUMP’s leader Cynthia Ligeard was nominated as President of the Government of New Caledonia, CE’s Philippe Michel became president of the Southern Province, while the post of speaker of the Congress went to UCF leader Gael Yanno (replacing independence leader Roch Wamytan, who was elected in 2011).

The governance pact commits CE, FPU and UCF to form a common front in the face of the call from the FLNKS for the full implementation of the provisions of the Noumea Accord. However, following the experience of the so-called “Republican pact” created after the 2009 elections, this governance pact is unlikely to last for the five year term of the new Congress. In spite of their loyalty to France, there are still fundamental policy differences between the competing anti-independence forces on issues like mining, collaboration with the independence parties and the future relationship with the Pacific region.

These electoral divisions set the context as the country moves towards a decision on its future political status.

There are a number of issues still dividing political parties in New Caledonia, which complicate the timing of any move towards a referendum on independence:

Where to from here?

The next few months will bring important interventions from the French State to break the logjam of New Caledonian politics.

In a speech to New Caledonia’s Congress on 18 July, France’s Overseas Minister George Pau-Langevin confirmed that the French government will send two senior officials, Alain Christnacht and Jean-Francois Merle, to meet with government and community leaders to discuss their current perspectives (Merle was a key figure in creating the 1988 Matignon-Oudinot Accords, which ended the armed conflict that wracked New Caledonia in the mid-1980s; Christnacht was the architect of the Noumea Accord, which has framed New Caledonia’s decolonisation process for more than 15 years).

This mission will be followed by a meeting in Paris of the Committee of Signatories to the Noumea Accord, to be held in September or October. This meeting will provide an opportunity for the French State and key leaders to debate a number of contentious issues still before the government and Congress of New Caledonia.

Finally, French President François Hollande will attend the November 2014 G20 meeting in Australia and is scheduled to travel on to New Caledonia for a major speech, which will outline his government’s proposals for the future.

In spite of significant advances over the last 15 years, there are still a fundamental economic and educational gaps between the indigenous Kanak people and other New Caledonians

In spite of significant advances over the last 15 years, there are still a fundamental economic and educational gaps between the indigenous Kanak people and other New Caledonians (whether the descendants of those settlers, convicts and indentured workers who arrived during the colonial era or more recent migrants from France, Tahiti and Wallis and Futuna).

As Kanaks continue to press for independence, FLNKS leaders have long relied on support from the international community through the United Nations Special Committee on Decolonisation, the Melanesian Spearhead Group (MSG) and the Pacific Islands Forum (PIF). For the first time in eight years, the PIF sent a mission to New Caledonia in 2013, the UN Special Committee sent a mission earlier this year while the MSG plays a crucial role in solidarity – the 2013 MSG summit was held in New Caledonia with the chair of the subregional organisation passing to FLNKS spokesperson Victor Tutugoro (the MSG has also established an FLNKS unit within its Secretariat in Port Vila, Vanuatu).

This international solidarity becomes even more crucial, especially as the timing for New Caledonia’s political decision in the next five years coincides with a similar debate on self-determination in Bougainville.

As the Pacific Islands Forum moves to integrate the US and French territories into regional institutions, there is a crucial debate about whether the Forum should change its status as an organisation linking the independent nations of the region. Successive governments in New Caledonia, backed by France and Australia, have been lobbying to change New Caledonia’s status within the Forum from associate to full membership, even before a final decision is taken on independence.

The FLNKS has supported this discussion, but there are still some doubts about joining the Forum as a full member before New Caledonia’s final political status is determined. In an interview during the 2013 Forum leaders meeting in Majuro, FLNKS leader Roch Wamytan said there were differing opinions about the change: “France continues to control the sovereign powers like defence, foreign affairs, currency and so on. That could put our friends in the Pacific in a dilemma because the Forum and the MSG want New Caledonia to be a member of their organisations, but they don’t want France to join at the same time!”

This issue was not mentioned in the Forum communiqué from the recent leaders’ meeting in Palau. But with a referendum on self-determination looming in the next few years, New Caledonia’s political status and the Kanak quest for independence will once again force its way onto the regional agenda.

Nic Maclellan works as a journalist and researcher in the Pacific islands and is a correspondent for Islands Business magazine.