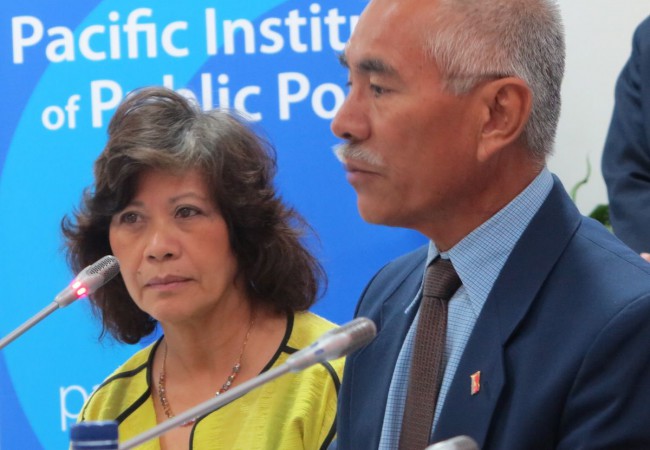 The Dili Consensus [PDF 0.2MB] is the internationally acclaimed outcomes document of the two day conference convened by the Government of Timor-Leste and the g7+ Secretariat and facilitated by the Pacific Institute of Public Policy with support from the United Nations Economic and Social Commission for Asia and the Pacific (UNESCAP) and Australian Aid.

Under the theme ‘Development for All: Stop Conflicts, Build States and Eradicate Poverty’ the conference brought together over 200 participants from 48 countries to discuss priorities for the post-2015 development agenda.

The Dili international conference was the first time self-identifying ‘fragile’ countries (either by virtue of being conflict affected, or geographically or otherwise vulnerable) came together to forge a bloc identity, share experiences of the Millennium Development Goals, and to build solidarity around the global debate on the post- 2015 development agenda. The Dili Consensus made a clear call for a new approach to development that concentrates on ownership of the development agenda by those affected, and a greater focus on inclusive economic growth, peacebuilding and statebuilding, environmental management and climate change.

‘The contribution of the Pacific island nations, which you brought together before the conference, added great value to the discussions and outcomes’

As a lead in to the Dili international conference on the post-2015 development agenda, PiPP brought together 30 government, academic and civil society delegates from the Pacific for a round table consultation. Delegates agreed the Millennium Development Goals (MDGs) have played an important role in focusing development efforts, but do not fully reflect national and regional development priorities. As a region, the Pacific has been labelled a failure in terms of meeting the MDGs, which raised concerns about the application of global goals that are defined without country ownership.

The outcomes of the consultation [PDF 0.5MB] identified five broad areas that were not adequately covered in the MDGs: inclusive economic growth, environmental and natural resource management (especially in relation to oceanic resources), state effectiveness, peace and justice and aspects of social service delivery. Climate change was a central focus of discussions, and delegates concluded the need to hold to account the countries that contribute most to the problem, and marshal international support for climate change mitigation, adaptation and disaster risk reduction strategies. Specifically it was agreed that there was a need to greatly simplify criteria and processes for accessing climate change financing, which is currently particularly disadvantageous to small island states.

The round table consultation was conducted in a spirit of mutual learning, and to find common ground and build solidarity. It was addressed by His Excellency Anote Tong, President of Kiribati and Dr Noeleen Heyzer, Under-Secretary-General of the United Nations and Executive Secretary of UNESCAP. His Excellency Kay Rala Xanana Gusmão, Prime Minister of the Democratic Republic of Timor-Leste, said of the consultation: ‘The contribution of the Pacific island nations, which you brought together before the conference, added great value to the discussions and outcomes’.