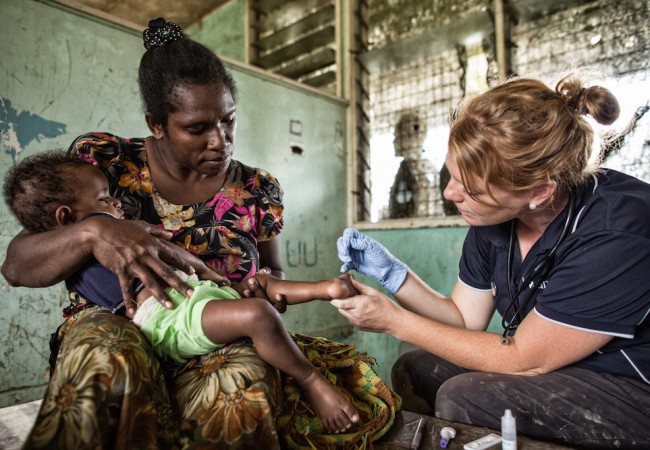 There are widespread reports these days from Papua New Guinea of budgetary difficulties, from budget cuts to church health services to government salary payment delays. Why?

Total expenditure is budgeted in 2016 to be slightly below the 2015 level. But it is still 50 per cent above 2012 levels. (With the change in accounting rules, it is difficult to make comparisons going back before 2012.) That’s massive growth. So what is the problem? There are three.

The first is a big shift in allocations. Since 2012, there have been big increases in interest payments (due to increased borrowing), payments to MPs through district and provincial funds, payments to schools (in lieu of school fees), and compensation to employees. Deduct these and there is an 18 per cent increase in spending compared to 2012 to fund everything else, which includes critical things like maintenance and church health spending. That’s the “discretionary spending” shown in Table 1 below. (It is not actually all discretionary but A to D cover major items that are inflexible (wages), obligatory (interest), or top government priorities. “Discretionary spending” covers everything else.) 18 per cent sounds like a reasonable increase, but it is before inflation. Adjust for inflation, and the 2016 budgetary allocation for what I’m calling discretionary spending actually falls slightly relative to 2012.

The second problem is revenue. The budget assumed that 2016 revenue would equal that of 2015. Given the slowdown in growth, this is realistic. Indeed, things may be worse, given that the oil price is below the level assumed in the budget. (The budget assumed an oil price of USD$54, up from $52 late year. In fact, oil prices are much lower. The UK Brent crude, for example, averaged $53 per barrel last year, and only $31 a barrel so far this year.) Unfortunately, 2015 revenues were not the K12.5 billion estimated at the time of the 2016 budget. In fact, according to the final numbers just released, they were only K11 billion. It is hard to predict what will happen to non-tax revenue, but it seems reasonable that the K788 million shortfall in tax revenue in 2015 (final figures compared to revised estimates) will flow through into 2016. So that’s another (roughly) K800 million shortfall.

The third problem is borrowing. PNG needs to raise K2.1 billion in net borrowing this year to meet its budget targets. Domestic sources are limited, and the budget assumed K2.8 billion in a sovereign bond: almost 20 per cent of total spending. But that plan has apparently been shelved, presumably assessed as infeasible, leaving a huge hole in the government’s financing plans. PNG can borrow more domestically than it assumed in the budget, but will find it difficult to fill the gap entirely. Let’s say the government doesn’t retire K1.5 billion of domestic debt as originally planned, but is unable to increase net domestic debt either, due to limited market appetite. This would leave a funding gap of K1.3 billion (K2.8 minus K1.5 billion).

That means there could be, because of the estimated revenue and borrowing shortfall, K2.1 billion less to fund the budget. If we assume all shortfalls fall on the discretionary category of spending, that means that the maximum expenditure on that category is only K5.6 billion instead of the budgeted K7.7 billion: a 27 per cent shortfall, as Table 2 shows.

In summary, take out interest costs, wage costs and a couple of areas of priority spending, and the budget for everything else is back at 2012 levels after inflation: that’s Table 1. But, as per Table 2, even the modest allocations for many items can’t be met because of revenue and borrowing shortfalls.

Sources: Table 1, and the text.

Of course, these are just predictions and guesses, but they do give a good sense of the situation PNG is in. Its current fiscal problems are due to the big shifts in the way the budget is spent, an inability to finance the deficit and much lower than expected revenue receipts. The fall in commodity prices is certainly a major factor behind PNG’s current fiscal woes, but the situation is exacerbated by the big spending initiatives of recent years – the large payments to schools, the funds to MPs, the rapid growth in the salary bill, and the big increase in borrowing.

What needs to be done? There are no easy answers. Expenditure reforms are needed. Nothing can be done about the interest bill, but the other “non-discretionary” items could in fact be put on the table. Reform options include a freeze on salary increases, further cuts to district and provincial MP funds, and cuts to the school subsidy program. Revenue reforms should be re-examined. And a new borrowing plan is needed. Given the difficulties accessing both foreign and private commercial markets, PNG may need to turn to the multilateral system and negotiate a package of funds in return for reforms.

Finally, the government left it until very late last year before it introduced a supplementary budget. These numbers suggest that another supplementary budget will probably be required this year. It would be better to bring it down sooner rather than later.

Stephen Howes is the Director of the Development Policy Centre and a Professor of Economics at the Crawford School. Stephen served in senior economic positions for a decade at the World Bank before becoming AusAID’s first Chief Economist. In 2011 he was a member of Australia’s Independent Review of Aid Effectiveness.