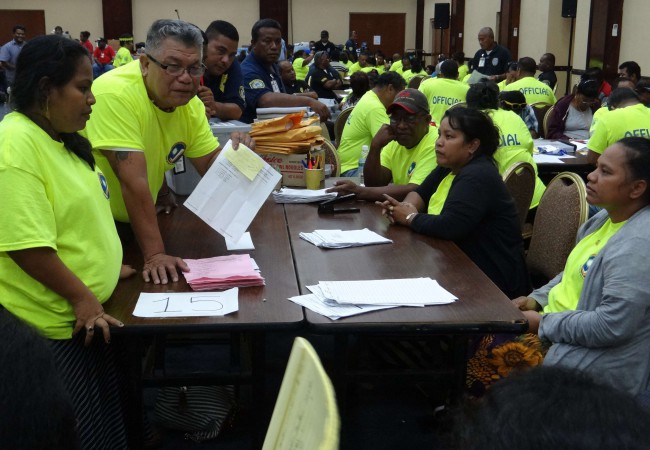 Migration from war-torn Syria is consuming Europe and stories of desperate refugees fleeing from conflicts in the middle east are grist for daily stories in global media, which has put ‘migration’ high on the international agenda.

In the peaceful north Pacific, a different type of migration has been continuing steadily to the United States for two decades. Visa-free access to the United States enjoyed by citizens of the Federated States of Micronesia, Marshall Islands and Palau has dramatically impacted islanders from these three north Pacific nations in ways both positive and negative. This provision in the Compact of Free Associations with these countries—that gives Washington control of the defense of this vast region, as well as access to an important military installation in the Marshall Islands—has worked as a safety valve for island economies and governments that do not have the ability to provide jobs, education and health care opportunities to meet population growth.

Most of the ‘conversation’ about migration from the islands to the U.S. has focused on the out-bound for obvious reasons: There are estimates that upwards of 40 percent of all Micronesians and Marshallese now reside in the United States and its territories, such as Guam. There is a lot of negative, particularly in Guam and Hawaii where high costs of housing have fueled homelessness, and the large concentrations of islanders in these relatively small populations have in recent years resulted in their being a target of racism and discrimination. Yet, a similar demographic on the mainland U.S.—in Northwest Arkansas, where an estimated 10,000 Marshall Islanders reside in a tri-city area—has been largely positive, with islanders being actively recruited by huge poultry packing companies. Meanwhile, in the western state of Oregon, which has thousands of Micronesians, Marshallese and Palauans scattered in various cities, the island community formed the Compact Action National Network, which has successfully gained Oregon State Legislature adoption of important legislation for resident islanders.

Islanders living in the U.S. mainland do better economically, no doubt because of the lower cost of living in many locations in which islanders have chosen to settle. A small percentage of these out-bound migrants run afoul of the law in the U.S., illegal behavior that often results in deportation and a red-flag status preventing them from returning to the U.S. Deportations have escalated, mirroring the increase in the number of citizens of these three nations living in the U.S. While the number of deportees was generally single digit annually in the early- and mid-2000s, it has risen significantly. In 2015, 70 Micronesians, 23 Marshallese and 11 Palauans were deported from the U.S. Since 2003, the Marshall Islands is averaging 16 deportations annually, with a spike in 2013 to 37. While these numbers are small on a global scale, they are big for small island populations, and have had some negative consequences at home.

An editorial in the October 2, 2015 edition of the Marshall Islands Journal commented on an assault by two attackers that sent a young man to the hospital with a broken jaw and other injuries. ‘The two gentlemen administering the jaw-busting were…deported from the United States for engaging in unbecoming activities,’ the editorial noted. This incident offered ‘a view of the dark side of Marshallese easy visa-free access to the U.S. It is as though we take large groups of our citizenry and transport them off to the States and then, after a period of time, the bad actors are weeded out and returned to Marshall Islands: American employers are beneficiaries of good Marshallese labor while Marshallese citizens here are “beneficiaries” of bashed-in jaws. Is there something wrong with this picture?’

But the in-migration is by no means entirely negative. The Compacts with the Federated States of Micronesia and the Marshall Islands that came into effect in 1986 (and in Palau in 1994) allow islanders to serve in the U.S. Armed Forces. For many young islanders, the U.S. military is their ticket off the island and opens opportunities for post-service education. In fact, by the 2000s, recruitment on a per capita basis from the Compact nations (as well as American Samoa) greatly out-paced enlistment rates of Americans.

An increasing number of U.S. military veterans are returning to Majuro to work. During the past year, we’ve seen demonstrations of what Marshallese veterans with 20 or more years of service bring to the table when they are put into positions of authority. Robson Almen, a ‘lifer’ with over 20 years in the military, retired several years ago, applied for and was hired as the Marshall Islands Chief Electoral Officer in 2014. He established a plan with a timetable and proceeded to implement it in the lead up to the November 2015 national election. It was one of the smoothest-run elections in decades that contrasted sharply with the chaos of the 2007 vote. An editorial in a December edition of the Marshall Islands Journal praised Chief Electoral Officer Almen and Electoral Administration ‘for an efficiently managed national election. In contrast to some past elections, there were very few problems associated with the recently concluded vote.’

In the November national election, Majuro voters elected Kalani Kaneko to serve in the 33-seat parliament. Kaneko retired in 2015 after 20 years of service in the U.S. Army. After President Hilda Heine was elected in late January, she named Kaneko as the minister of health. Solving long-standing problems at the ministry, and in particular Majuro hospital—which suffers from chronic doctor, nurse, medicine and supply shortages—is a Herculean task. Kaneko does not have a health background. What he brings to the table is 20 years experience working in the U.S. Army that inculcated an appreciation of leadership, accountability, systems, and time management. These are the mostly missing ingredients at the Ministry of Health that Kaneko is now working to develop.

The point is, both Almen and Kaneko have an understanding of accountability and systems management from their tenure in the Army, and because of their decades of experience in the military system, they do not seem to have difficulty implementing requirements that lead to improved services to the public while relegating family relationships to a backseat in government service. While opportunities for jobs, health care and education have been the main motivating factors pushing Marshallese and Micronesians to leave to the U.S., in recent years the decline in service by a corruption-riddled government workforce is negatively impacting quality of life for many island residents, and increases motivation to migrate.

President Heine in her inaugural address to parliament in February this year emphasized the need for government workers to improve services for the public. Kaneko, Almen and other U.S. military veterans who have returned to the Marshall Islands are showing how direction, purpose and motivation can be used to engage government workers to deliver services at a higher level.

All of this emphasizes that as dramatic as these north Pacific nations’ experience is with out-migration, it is not a one-dimensional situation of people simply fleeing their islands for greener pastures. It is changing lives of many islanders who have moved to the United States, many for the better, some for worse. But it is also beginning to bring back people with decades of experience that they are putting to work for the benefit of the public.

Caption: Marshall Islands Chief Election Officer Robson Almen (second from left during tabulation of votes from the November 2015 national election) is one of a number of U.S. military veterans who have been returning after years of service in the military to work in key positions in government.