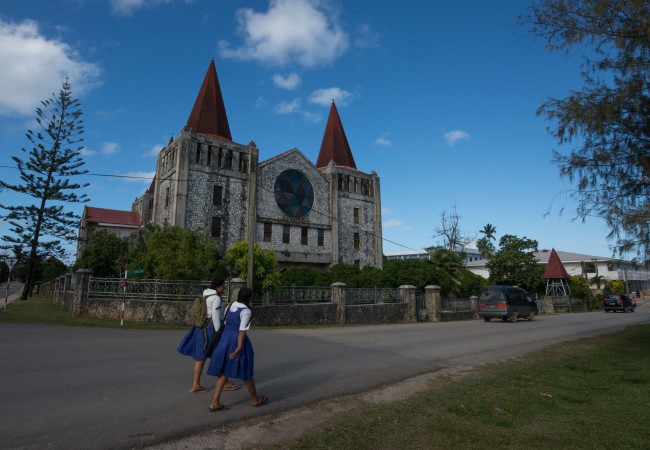 It was the first time for the two Pacific leaders to meet as prime ministers. They established a warm friendship that ensured cordial and frank discussions on a number of issues concerning the two neighboring countries.

Both leaders have embraced change as the way to move their countries forward in terms of development. But the reforms they sought have not been easy to implement, particularly when they touch socio-religious features of society.

Mr Bainimarama had effectively altered Fijian Society from a historical orientation to one that safeguards the rights of the indigenous people and their interests, and moved Fiji to the current realities of a multicultural society. But he is far from reaching his goal, as his main opposition in Parliament is the indigenously driven Social Democratic Liberal Party (SODELPA) led by the fiery Chief of Rewa, Ro Teimumu Kepa.

The dismantling of the Council of Chiefs by Prime Minister Bainimarama and the restrictions he placed on the Methodist Church Conference were two actions the indigenous people of Fiji had objected to, but the Commodore insisted he had to remove the political power of the Chiefs, along with the political influence of the Methodist Church, so that Fiji could move forward as a multicultural society. Both were institutions that strongly backed the interests and the rights of the Indigenous Fijian.

There is one thing though that most Fijians have accepted irrespective of their political persuasion: they are on a pathway of change, and that pathway seeks the transformation of Fiji into a multicultural society.

To keep constructing Fiji against this on-the-ground reality of multiculturalism will only multiply socio-political problems, and the past decades have proven this to be so.

Some have reasoned that Fiji is on a pathway that is irreversible in spite of the fact that they still have much to contend with in terms of sorting out indigenous issues, especially land ownership and a special place in the political architecture of Fiji.

Prime Minister Pohiva has been the major force in Tonga over the past three decades after leading a movement that called for the democratization of the Tongan society – a society whose political and social powers had been dominated by the royal family and nobility for centuries.

But change, or at least the call for it, has become the new normal in Tonga. Tonga’s ruling elite is not as resistant to change, and people are generally in support of it, especially when it comes to the way Tonga is being reconstructed into a more equitable and vibrant development movement. One of the major features of this emerging social construct is the recognition and engagement of women whose participation is needed if any social movement is to be successful.

What became apparent at the Pohiva-Bainimarama discourse is the setting of a new course in the way Pacific countries are willing to carry out diplomatic relations. They are applying the Pacific Way in which leaders can talanoa – talk, discuss, dialogue, exchange ideas – without necessarily highlighting opposition on matters they differ on.

A good example is the way Tonga and Fiji have each made a stand on the West Papua issue: Mr Pohiva strongly supports a Free West Papua. Mr Bainimarama takes the position that West Papua is part of Indonesia, and Fiji maintains a close relationship with Indonesia.

A new direction in doing foreign relations is being embraced

The president of Indonesia, Joko Widodo, has visited Fiji on a couple of occasions. Likewise, Mr Bainimarama is keeping close ties with Indonesia. It is reported that Mr Widodo may be sympathetic towards the West Papua plight, more so compared with previous presidents. This was demonstrated in the recent releasing of West Papuan political prisoners, almost at the same time that executions were carried out on Australian drug dealers in Indonesia.

Obviously the West Papua situation has not been discussed in the Pohiva-Bainimarama dialogue, although their meeting was conducted at the venue of the Pacific Leaders Regional Green Growth summit, where most of the Melanesian delegates have been very vocal in their support of a free West Papua.

The traditional conduct of diplomacy in the Pacific has been bent on Western ways of doing business – open negotiation, frank to the point of being oppositional if there are differences, and seeking to achieve immediate results.

Tonga is embarking on a whole new direction in foreign policy. Previous administrations have treaded the familiar pathway of building a foreign policy that follows a Western architecture in which Australia and New Zealand, Great Britain, Europe and the United States have become the focus of engagement.

But in recent decades, Tonga has established development partnership with Asian countries such as China, Japan, India, and South Korea. This ‘new partnership’ is faring well for Tonga, especially in terms of a lot of Chinese grants and loans for development.

Tonga will continue to tread the same traditional pathway of doing foreign affairs, and will become more and more engaged with Asian countries, but a new direction in doing foreign relations is being embraced to run parallel with the more traditional and well-beaten path of diplomatic relations of previous decades.

The Pohiva Government has chosen this new pathway to build regional diplomatic relations that would lead to the doors of Pacific neighbors – and especially to Melanesian countries – Papua New Guinea, Solomon Islands, Vanuatu, and Fiji.

On his return to Tonga, Pohiva also spoke of a possible visit to Tahiti, and also to Samoa, in his quest to establish close ties with his Polynesian neighbours. The Pacific engagement – Pacific way, is the pathway of the future for Tonga’s foreign affairs.

But what does Tonga expect to benefit from its new policy on foreign affairs?

What does solidarity with other Pacific countries mean for Tonga, as well as the countries of the Pacific?

Does the formation and presence of the Pacific Island Development Forum (PIDF) speak maybe of the lack of solidarity there is in PIF among Pacific Island states? Or is it just an extension of the growing need for Pacific nations to determine what and how they want to develop their economies?

Obviously there is more to diplomatic relations than just a warm Pacific good will towards each other. Tonga’s move to be closer to Fiji and to Papua New Guinea has economic implications.

PNG’s emerging new leadership, represented by Oro provincial governor Gary Juffa, a Member of Parliament and Governor for Northern Province, uttered to Tonga’s Prime Minister in Fiji, as a matter of fact, that if PNG’s wealth is properly managed, all the Pacific Islands should be beneficiaries in its rich resources of gas, petroleum, and forestry products.

Those who are members of the Melanesian Spearhead Group (MSG) believe this to be possible, and they intend to carry out cooperative efforts among their nations to develop their ‘rich natural resources’ into a resource bank for all Pacific Island Countries.

If this is not the Pacific way, then what? Maybe other leaders might want to follow the Bainimarama-Pohiva model of diplomacy. It may have its benefits.