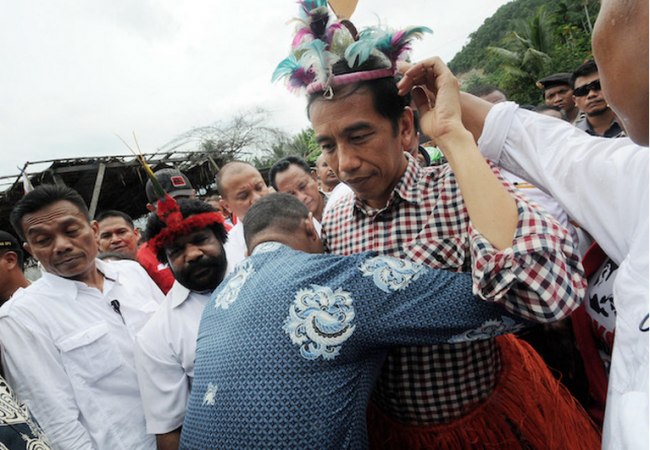 On the surface, the galvanised diplomatic and political ties fixed in fresh bilateral treaties between PNG and Indonesia appear to pave the way for strong performance and shared prosperity for the citizens of both countries. Well that is the promise that the two leaders; Indonesian President Joko Widodo and PNGs Prime Minister Peter O’Neill made in Port Moresby last week. The hope is that with the development and investment in vast natural resources and desirable economic, trade, transportation and communication links that each of their people will thrive.

The truth is that Joko Widodo’s recent visit to Papua New Guinea is emblematic of a number of wily diplomacy tactics.

Strengthening economic ties and trade relations is expected of neighbouring states (immediately after the release of five West Papuan political prisoners). The thirst in PNG for commercially viable Asia-Pacific markets is halfway quenched by Indonesia’s mere presence this week ahead of PNG’s role in chairing APEC in 2018 in its capital Port Moresby.

With trade and investment dressing up the shop front, it’s possible to sideline frank discussions on headline domestic issues in Indonesia if red carpet, tight security and 21-gun salutes supersede media and civil freedoms. Tight security in Port Moresby prevented the planned peaceful protests by West Papuan activists and the restrictions on PNG media censored straight talk between journalists and the visiting head of state.

It is likely that the bilateral talks between the two leaders resulted in agreements on a diverse range of matters, including cross border cooperation for energy production, crime prevention, and deeper engagement at multilateral forums including the Melanesian Spearhead Group.

Indonesia is a middle-income country with a population of almost 250million people, an almost 6 per cent growth rate, and according to the World Bank a GDP measure of USD 868.3 billion in 2013. By contrast PNGs economy recorded USD15.41 billion in GDP the same year. PNGs population of 7.321 million citizens pales in comparison to its nearest neighbour. In 2013 PNGs annual GDP growth rate was 5.5 per cent, by 2015 its GDP has grown to 16 per cent.

From an economic perspective, the growing trade links and budding economic ties between Indonesia and PNG are a match made in free-market heaven. PNG’s quickly expanding middle class presents a market opportunity for Indonesian investment in products and services. PNG’s own vast raw materials and natural resources are an incentive for Indonesia to look nearby for otherwise expensive raw materials and energy products.

The benefits are clear. The two countries are linked via terrestrial and maritime borders. They also share impressive portfolios of vast natural resources and accessible transportation routes into hefty commercial Asian markets. Both countries have expanding populations and therefore labour markets essential for globally competitive industries such as manufacturing and textile. Technological advancements and improvements in information technology and communications in both countries makes improved access possible to otherwise inaccessible markets and geographically challenged yet commercially viable sectors such as agriculture and forestry.

Gary Juffa says ‘Melanesian voices’ are being muzzled in the haste to secure trade agreements.

But Oro province governor Gary Juffa says ‘Melanesian voices’ are being muzzled in the haste to secure trade agreements. Controversially, Juffa wants the Melanesian Spearhead Group (MSG), the political grouping of four Melanesian countries and one territory, to be disbanded for what he says is its failure to represent Melanesian voices first and foremost. Mr Juffa’s implication that a crisis of conscience should overcome Melanesian leaders on the eve of the MSG Leaders Meeting in Honiara later in 2015 is perhaps a welcome interruption to the international criticism leveled at Indonesia in recent weeks. The alarming volume of publicity on social media and international attention on the social injustices and human rights breaches in Indonesia’s two Papuan provinces poses tricky questions for Indonesia’s diplomacy efforts regionally and on the international stage. Capital punishment sanctioned by Indonesia in recent weeks against foreign death row prisoners looks set to undermine its overall governance record.

After Mr Widodo’s visit to PNG, Gary Juffa suggests that the MSG is being overtly influenced at an economic level to undercut key human rights issues relevant to Indonesia’s 11 million indigenous Melanesians.

PNG business leaders took their own stand away from the political tension to state unequivocally that, ‘there is [an] immediate potential for Indonesia to enhance domestic trade and connect businesses with PNG.’

PNG Prime Minister Peter O’Neill belabored the point over historic links, hailing the value of bilateral relations between Indonesia and PNG. O’Neill hailed Indonesia’s trajectory as ‘one of the truly great success stories of our region and in the global economy.’

So while the pleas for economic cooperation between the two states took centre stage, the festering backstory continues to undermine any proclamation of great success on Indonesia’s part as an emerging leader in the Asia Pacific region. Regular allegations of Indonesian military border tampering and incursions at the Wutung Border Post in PNG’s West Sepik Province are routinely ignored. And only last week, the suspected violation of PNG’s airspace by Indonesian military jets and an Australian Defence Force aircraft speaks volumes about PNG’s largely static military position and its submissiveness in the face of its two most powerful neighbours.

In an ideal world, a true commitment to equitable prosperity for the people of Indonesia might include a categorical statement on the conditions of the indigenous Melanesians in the Papuan provinces in Indonesian territory. But Mr Widodo’s commercial pitch to an APEC-hooked audience in Port Moresby discussed exclusively the business-as-usual agendas of two sovereign states concerned primarily with their economic agendas.