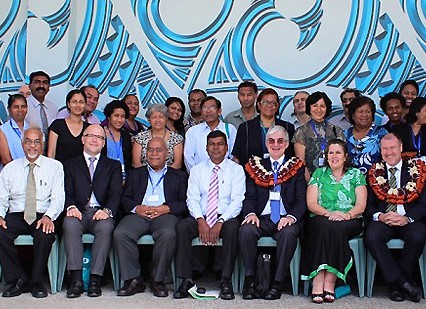 At its fourth biennial conference at the University of the South Pacific’s Laucala Campus, the Oceania Development Network (ODN) focused on ‘Addressing Inequality and Promoting Inclusive and Sustainable Development‘.

Opening remarks were made by ODN’s present chair, Professor Biman Prasad, who introduced the conference theme and its relevance to the Pacific’s development challenges.

Derek Brien, PiPP executive director and member of the ODN executive committee, delivered a keynote speech the Post 2015 Development agenda for the Pacific and its implications for public policy.

The Oceania Development Network was formed in 2003 as a regional initiative to address issues surrounding development in the Pacific. Initially based at The University of the South Pacific, ODN then moved to the University of PNG (UPNG) and Samoa and returned to Fiji in 2010. The Executive Committee has been meeting to discuss a way forward for its next Strategic Plan for 2015-2017 in light of post-2015 Development priorities for the Pacific.

ODN is one of 11 regional networks affiliated with the Global Development Network, of which PiPP is also a participating member, and aims to build research capacity amongst the young and emerging researchers on issues of policy relevant to the Oceania region.

The work of the ODN has received significant support from the Australian Government. Acting High Commissioner to Fiji, His Excellency Mr Glen Miles joined other panelists including USP’s Pro Vice Chancellor, Professor John Bythell, Professor Hurriyet Babacan, Professor of Development at the University of New England and Former Director of the Cairns Institute at the JCU, Professor Paresh Narayan, Alfred Deakin Professor of Finance at the Deakin University and Professor Vijay Naidu, Professor of Development Studies and Head of the School of Governance, Development and International Affairs at USP, at the opening session on Wednesday 11th September.